Maple Leafs Have a Proven History With College Players

The Toronto Maple Leafs are a professional hockey organization. In order to stay competitive and relevant in the ever-changing hockey landscape, they need to continually scout out the best talent available and attempt to bring them over to and make them part of the franchise.

The best way to acquire players is obviously through the NHL Entry Draft, which happens yearly. However, teams can’t sit idly by and only get players in the draft. They need to be proactive and search for different avenues that could lead them to more players. One of these roads leads to college hockey where the Maple Leafs have had some success recruiting and turning those players into NHL skaters.

Jimmy Vesey, who currently plays for Harvard, is the latest college powerhouse to grab the attention of the Maple Leafs. It’s a bit of an odd situation because Vesey was drafted by the Nashville Predators in the third round of the 2012 NHL Entry Draft. The talented forward has yet to sign with the Preds  and he currently stands to become a free agent on August 15th.

How is Vesey connected to the Maple Leafs? The answer may surprise you. His father was hired by the Maple Leafs this past summer to be an amateur scout for the club. If that unique connection isn’t enough, there’s another to keep in mind. The Maple Leafs actually drafted Jimmy’s younger brother, Nolan, 158th overall in the 2014 NHL Entry Draft.

The Leafs would love to have a player of Vesey’s calibre in the organization. He’s currently being called the best player in college. His frame, instincts, and skill set meshes perfectly with what the Leafs are looking for in a young, up and coming prospect.

Jimmy Vesey is not the first college player the Leafs have pursued and he certainly won’t be the last. The most recent acquisitions were Zach Hyman and Casey Bailey. The Buds traded with the Florida Panthers for Hyman’s rights and promptly signed the young forward to a deal. He is currently plying his trade with the Toronto Marlies.

Bailey was signed from Penn State, where he decided to forego his senior year in order to join the Leafs. He was able to suit up for six games at the end of last season where he scored his first NHL goal. Like Hyman, Bailey is with the Marlies so he can learn the intricacies of professional hockey this year.

These two players are recent additions to the Maple Leafs’ growing stable of prospects coming out of college. Arguably, the most famous college prospect in recent memory for the Leafs is none other than Tyler Bozak. Brian Burke, the former Leafs general manager, was the man to land the coveted free agent out of the University of Denver. 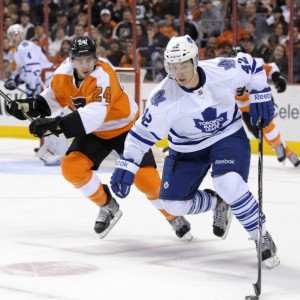 The slick centre went undrafted and has proven to be a valuable player at the NHL level. Bozak currently has 14 points in 18 games so far with the Leafs this year. The Buds are an up and coming team that is always looking for the next big player to add to their ranks.

Having Brendan Shanahan certainly helps. Shanahan possesses immense clout in the hockey world and is an integral part of winning over free agents and young players alike. When recruiting Bailey, Shanahan sat down and spoke on the phone with him for 30 minutes. It’s a situation you don’t hear of all that often, but shortly after, Bailey signed on the dotted line.

This doesn’t mean the Leafs will scoop up every free agent coming out of college, but they have some excellent history to back them up. They can turn these young men into NHL calibre players if everything works out. For an organization on the up and up, the ability to attract prized young assets is a tremendous strength.

Read Full Article on : Maple Leafs Have a Proven History With College Players