Albany Devils Ahead 2-0 On Utica Comets

Back in the late 1990s, the NHL ran an ad campaign called “Get Cup Crazy,” a play on the Prince song, “Let’s Go Crazy.” This weekend in Albany, fans were loud, be they from the Capital Region, Central New York, New Jersey or even the random dude wearing a Cornwall Aces sweater. Two Empire State rivals were going at it on the ice and the results were pretty similar. Partying like 1999? No. More like 1995. Crazy? You bet.

The first two contests of the First Round Calder Cup playoff series between the Utica Comets and Albany Devils mirrored much of their regular season bouts. Game 1 saw a close tilt. Game 2 was a runaway. Both with a familiar outcome, Albany winning.

As Comets head coach Travis Green lamented after Game 1, you can’t get away with playing 40 minutes against a team like Albany. In both games, it showed. The second period, in particular, proved perilous for Utica. During Game 1, the Comets didn’t register a shot on goal in the second. Game 2 saw Utica yield four goals in the second stanza. Although the Comets still have a good number of players from their 2014-15 Calder Cup finalist squad, perhaps the biggest missing piece is current Vancouver Canucks goalie Jacob Markstrom. 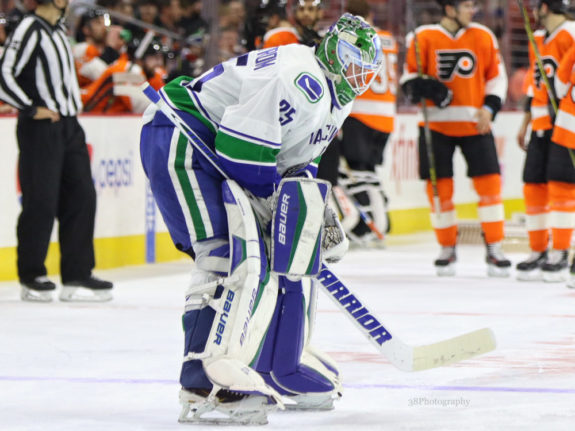 Conversely, the A-Devils used their ingredients successfully, including players new, those with playoff pedigree and an unsung hero. This wasn’t going to be a rerun of a long ago letdown against the aforementioned Aces. Albany forged chemistry with talent and under the supportive eyes of Ray Shero and John Hynes, it worked.

With that said, a series doesn’t truly start until the home team loses. The Devils will attempt to end the series and win their first road playoff game since the Lowell Devils defeated the Worcester Sharks in Game 1 of the First Round of the 2010 playoffs. It would also be the first postseason series victory for the AHL Devils since the Albany River Rats swept (4-0) the Hamilton Bulldogs in the Second Round of the 1998 playoffs.

Normally bruising Ben Thomson. Typically paired with the grinders, such as Rod Pelley, Chris McKelvie, and Pierre-Luc Letourneau-Leblond, Thomson had the right touch in both games. Thomson tipped home a goal in Game 1, tapped home a feed from Damon Severson in Game 2, getting Albany on the board in both contests.

As mentioned, a big part of the veteran presence with the Devils is center, Jim O’Brien. O’Brien won a Calder Cup with the 2010-11 Binghamton Senators and helped Albany’s surge on Saturday. O’Brien book ended the Devils scoring in the second with the eventual game-winning tally on the power play and the caper. O’Brien also recorded a helper and took home first-star honors. Albany will hope O’Brien is good to go in Game 3, after being checked into the far boards and going into the locker room, not returning for the rest of the game or said three-star honors.

Save for Damon Severson and Pavel Zacha, most of the returning reinforcements spent a solid amount of time in Albany this season. Through two contests, they’ve been clicking. Reid Boucher has two goals (one power play, one short-handed) and two helpers. Joseph Blandisi netted the eventual game-winning tally on a breakaway in Game 1. Zacha notched a helper in Game 1 and a power play marker in Game 2. Severson registered three assists in Game 2.

Special teams were a big part of Albany’s success in the regular season and they’ve carried into the postseason. In the regular year, Albany was third on the penalty kill and eighth on the power play. Through two contests, Albany is three for eight on the power play and has killed off all five of Utica’s opportunities with the extra attacker, including a four-minute double minor by Severson, for attempted spearing, in Game 2.

A PPG, a shorthanded goal, and another PPG for the @AlbanyDevils in this second period #ALBvsUTI pic.twitter.com/fr16ZbJJJc

Read Full Article on : Albany Devils Ahead 2-0 On Utica Comets