After failing to reach the Stanley Cup Playoffs for a tenth consecutive season, the Oilers will be looking to make significant changes to their roster in the off-season of 2016.

As has long been the case, Edmonton remains in search of NHL caliber defensemen who retain both experience and ability at hockey’s highest level. Ideally, General Manager Peter Chiarelli would like to add one, if not two defenders who can make an immediate impact in the Oilers’ lineup, yet whether doing so will come via a free agent signing or monumental trade remains to be seen.

However, whatever the case may be, Edmonton will still require a number of high quality prospects in their system in order to sustain their desired high level of play long into the future.

Fortunately for the Oilers, there are a number of prospects currently playing within multiple levels of their organization which have, and continue to show considerable promise for the future.

In particular, there are five players to keep an eye on in the coming 2016-17 season who, if they continue to develop and produce at their current pace, could soon be making a significant impact with the Oilers at the NHL level. 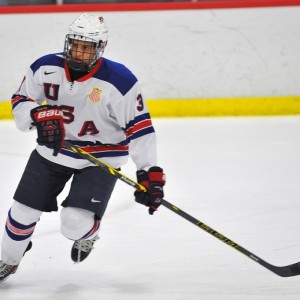 Despite being selected by the Oilers in the fourth round of the 2015 NHL Entry Draft, Caleb Jones has quickly outplayed his selection of 117th overall, dominating in his first season in the Western Hockey League in 2015-16.

As a first year defender with the WHL’s Portland Winterhawks, Jones recorded an impressive 10 goals, while his 55 points over 72 games played led all rookie defensemen. In addition to his offensive prowess, Jones also mixed in 64 penalty minutes, illustrating his willingness to mix it up with opposing players.

Checking in at 6’1″, 195 pounds, Jones is well-known his ability to play a strong two-way game. As a result, following the conclusion of the Winterhawks’ playoff run, Jones headed straight to Bakersfield, where he joined the Condors for a brief three game stint.

In 2016-17, Jones will head back to Portland for his second WHL season. Expectations will be high for Jones, who despite shattering early expectations, will be expected to improve upon his tremendous rookie season. If he continues to progress at his current pace, Jones will surely be headed to the Condors following his WHL career, where hopes are he will only continue to blossom as a defenseman.

A fifth round choice by the Oilers in 2015, 124th overall, Ethan Bear, like Jones, has and continues to progress in his development despite his low round selection at the annual Draft.

A four-year veteran of the WHL’s Seattle Thunderbirds, Bear notched 19 goals and 65 points from the blue-line in 2015-16, a total which ranked fifth best amongst WHL defenders. Further, Bear carried his dominant play into the playoffs, scoring eight goals and 22 points over 18 games played before he and his Thunderbirds were eliminated in the League final.

A 6′, 200 pounder, Bear is a solid, two-way defender with a crisp first pass and strong instincts in his own zone. Further, he features a quality one-timer which he loves to unleash, especially on the power play. Possessing the ability to play in all situations, Bear’s defence first game is complimented by elite offensive prowess, making him dangerous at both ends of the ice.

This coming season, Bear will head back to Seattle for yet another season with the Thunderbirds. Although he has yet to receive an entry-level contract from the Oilers, a strong season in the WHL could surely change that, and will certainly act as an incentive for the blue-liner in 2016-17.

Drake Caggiula burst onto the scene in 2015-16 with the University of North Dakota, where he helped lead the Fighting Hawks to an NCAA Championship.

In fact, Caggiula was so impressive that he generated a bidding war amongst NHL teams following the conclusion of his season, with the Oilers finally landing the highly touted free agent on a two-year, entry-level contract.

In his final season with North Dakota, Caggiula scored 25 goals and added 26 assists in just 39 games played, while he also added two goals in the National Championship on route to being named MVP of the tournament.

A slightly under-sized forward at 5’10”, 180 pounds with elite offensive skills, Caggiula’s best qualities are his shot, stick-handling and vision on the ice. He has the ability to find teammates in tight situations with a crisp pass, as well as to beat opposing defenders one on one with slick, highlight reel moves.

The 2016-17 season will see Caggiula make the jump to professional hockey. In all likelihood, he will begin the season with the Bakersfield Condors of the American Hockey League, and could possibly see time with the Tulsa Oilers of the ECHL depending on how his first season progresses. Whatever the case may be, the Oilers and their fans will surely have a keen eye on Caggiula, as he is their most highly touted College prospect since Justin Schultz.

Oilers fans likely aren’t familiar with the name Josh Winquist, but given how he has developed of late, he could very well become a household name in Edmonton.

With the likes of Connor McDavid, Leon Draisaitl and numerous other top prospects arriving in Edmonton in recent times, Winquist’s name has been forgotten amongst a bevy of Oilers prospects, yet he has begun to separate himself from the pack, especially in 2015-16.

Last season, Winquist battled the injury bug early, but once he returned to health was one of the Bakersfield Condors’ most dangerous and consistent performers. Over just 35 games played, Winquist registered 30 points, easily notching the greatest points per game rate among Condors forwards, out-producing the likes of Anton Slepyshev and Bogdan Yakimov, two players with NHL experience in Edmonton.

In 2016-17, Winquist’s most importance focus will be on his health. If the 22 year-old, 6′, 180 pound left winger can remain in the lineup, he appears poised to enjoy a breakout season. Well-known for his incredibly competitive nature and on-ice drive, Winquist will play a leadership role with the Condors, and if he continues to produce offensively, could surely receive a brief stint with the Oilers in 2016-17.

Jordan Oesterle is quickly becoming a familiar face in Edmonton, and deservedly so.

At 6′, 185 pounds, Oesterle doesn’t have the ideal size of an NHL defender, yet more than makes up for this perceived deficiency with his skills and play on the ice. Sure, he won’t through his weight around, but Oesterle showcased his most notable ability, which is to move and distribute the puck, which he showed he could do at hockey’s highest level with Edmonton last season.

In 2016-17, Oesterle’s spot with the Oilers will likely boil down to how Edmonton addresses their blue-line in the off-season. If Peter Chiarelli makes major changes to the defense core, which he certainly should, chances are Oesterle begins next season with Bakersfield in the AHL.

However, given how he performed in his first stint in the NHL, it appears as though Oesterle could be a full-time, third pairing defender in the foreseeable future.

Let us know in the comments below!