The Anatomy of Ovechkin’s 1,000 Games

When the Washington Capitals signed Alex Ovechkin to a 13-year contract extension, owner Ted Leonsis got a call from David Stern, one of many who had criticized the franchise’s latest long-term deal.

“David Stern called me and said, ‘Boy, you are going to live to regret this. I thought you were a smart guy, and that’s the stupidest thing I’ve ever seen,'” Ted Leonsis laughed. 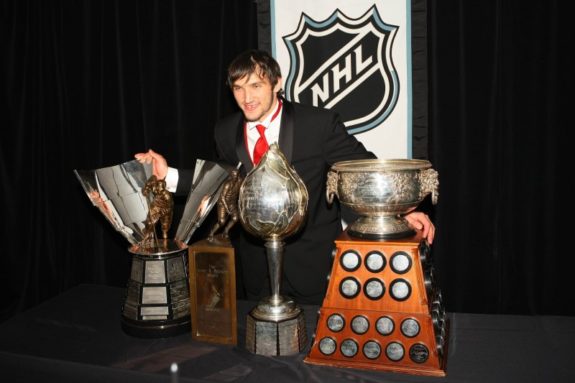 Since being taken first overall by Washington in 2004, Ovechkin has won six Richards and three Harts. (Tom Szczerbowski-USA TODAY Sports)

Since then, there have been no regrets; Ovechkin has been the x-factor of the Capitals’ franchise. Not only do his nine 40-plus goal seasons, six Rocket Richard trophies and three Hart trophies speak for themselves, but he’s also transformed Washington into a hockey town.

“We weren’t a hockey market at the time,” Leonsis said of the years before Ovechkin’s contract extension. “When Alex said, ‘This is where I want to be and I’ll make a long-term commitment,’ I think it was the tipping point for the organization for the fanbase to say, ‘We’ve got something here’ and he’s delivered in every way.”

The Russian captain will be the first Capitals player to play 1,000 games with the organization when he suits up Sunday, ironically against Washington’s rival Pittsburgh; this is the second milestone he’s hit the season, after hitting the 600-goal mark against Winnipeg in March.

“Nothing can surprise you with that guy,” Tom Wilson said. “He’s the best goal-scorer probably of my time definitely, generation.”

At the start of his career, Ovechkin said that D.C. was confusing and that he didn’t speak too much English, but players like Dainius Zubrus, Olaf Kolzig, Jeff Halpern and more helped him find his way, and that Washington had the “best locker room” he’d played in, despite the team’s lack of success in the regular season. Since joining the organization, he’s become Washington’s leader in goals, points, hat tricks and shots, and likely still has a significant amount of time left in his career.

“Obviously, I was lucky to be drafted here, you know, right away, I feel this is my second home and the organization, the fans, the community has been great to me,” Ovechkin said.

As time has gone by, he’s also become the face of the organization that he has fallen in love with over time.

“If I take back time, I would’ve signed for 16 years,” Ovechkin said. “I’m happy I sighed 13 years, and happy I stay three more years… again, most important thing is to win a Stanley Cup, and I want to win.” 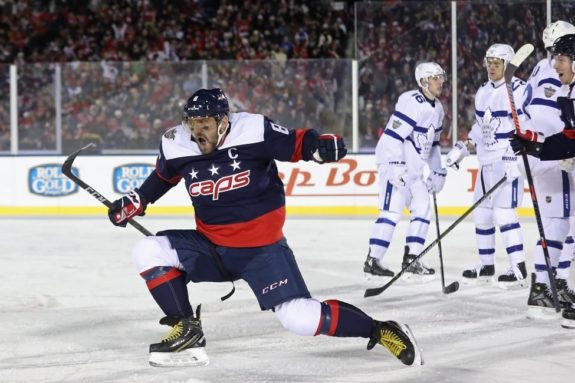 Ovechkin said he has no regrets about signing with the Capitals and still has his sights set on winning a championship with the franchise. (Geoff Burke-USA TODAY Sports)

Leonsis said he has been grateful for Ovechkin’s time in Washington, saying that it has been unbelievable to see everything that he has brought to the franchise. In addition, he said he believes there has been no doubt that he has been “the best athlete, the most productive athlete in the history of Washington, D.C. in terms of contribution.”

“That he has reached 1,000 games this quickly is an amazing accomplishment with the way he plays,” Leonsis said. He led the league in shots, he [has been among league leaders] for many years in hits and goals. It’s a phenomenon. And I think when all is set and done in the history books, looking at them, that it will be a part of his career, that people will say may not be replicable. These are big men, the league has gotten faster, but it’s also gotten more fit. And that Alex has been able to span those generations and continue to play and be incredibly productive really is a feat.”

Over the course of his 13-year career, the 32-year-old has accumulated over 2,000 hits, and with the way he plays physically, one thing that has gone under the radar has been his longevity in his career.

“What amazes me probably more than anything is, you think how physical he plays,” Trotz said. “Because you’re playing physical and running into people… and to be as durable as he has been is more amazing than anything.”

When Trotz served as the first head coach of the Nashville Predators, he remembers his defensemen being nervous to suit up against Ovechkin, simply because of his physicality and how the 6-foot-3, 235-pound winger towers over many players. 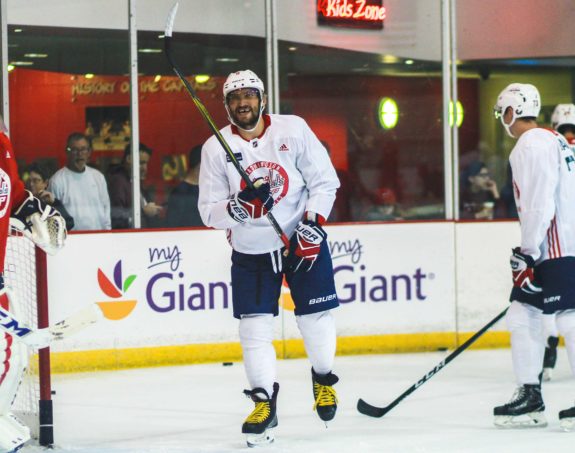 Ovechkin will reach 1,000 games quickly in his career, all thanks to his durability over time and ability to keep up with the league. (Sammi Silber/THW)

“The setup we had in Nashville, we had a big long hallway and you could see the visitors down the hall. When Alex was cutting a stick or something, you realize how huge he is, big, giant legs and he’s a big man,,” Trotz said. “You could hear the guys were like, ‘Have you seen this?’ I’d never seen him off the ice and the guys are saying how big he was, and you could see how physical he was. We had a couple of nervous cats.”

As Ovechkin’s evolved over the years, developing his game and fine-tuning with the everchanging speed and strength of the league, he said that he has taken a step back in physicality so that he can remain healthy and keep up with scoring.

“As you get older, you realize when you have to get a hit and when you have to take a hit,” Ovechkin said. “In the playoffs, it’s different hockey. Every shit you have to do something out there, but in the regular year, you don’t have to run around and hit everybody. Obviously, you have to play smarter and do different things.”

Despite all of his accomplishments and historic career, Ovechkin is still searching for his first Stanley Cup and hopes to bring it to Washington. It is the championship that he has played for over the entirety of his career; in fact, he recently said he’d trade a 50-goal season for the Cup.

Over time, the playoffs have ended in similar fashion for the Capitals; a deep run has been out of reach since the team reached the Stanley Cup final back in 1998, but the organization knows – and believes – in reaching a championship, with Ovechkin leading the way. 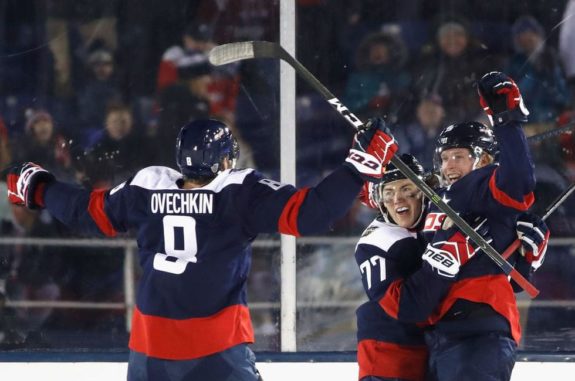 Despite years of regular season success, Ovechkin and the Capitals want to break the narrative of past seasons and are ready to close in on a Stanley Cup championship. (Photo by Mark Blinch/NHLI via Getty Images)

This season, Ovechkin is ready to compete for a deep run and believes that although Washington lost some pieces in the offseason and has become a relatively younger team, his teammates know their roles, which should help them be a top contender.

“Everybody tried to be a really good team this season, and in the playoffs, we don’t get success,” Ovechkin said. “I hope with the guys we have right now, we can take a step forward in the playoffs, stay for a little bit longer and win what we all want.”

The post The Anatomy of Ovechkin’s 1,000 Games appeared first on The Hockey Writers.

Read Full Article on : The Anatomy of Ovechkin’s 1,000 Games