The Nashville Predators appear to be investing in Marek Mazanec instead of Magnus Hellberg for the 2015-16 season. Earlier this week, the Preds re-signed goaltender Marek Mazanec to a one-year, two-way contract worth $575,000 at the NHL level and $100,000 at the AHL level. This re-signing decreases the likelihood of restricted free agent Hellberg remaining in the organization for next season. 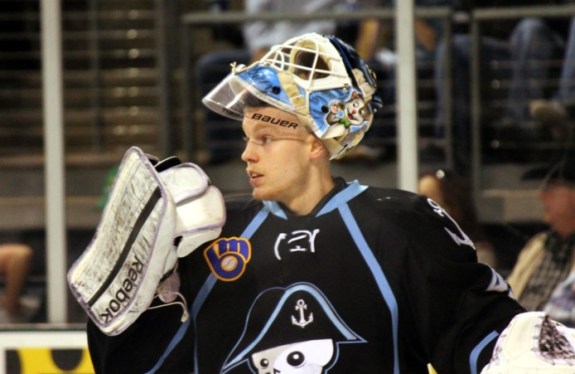 Mazanec is not the only factor in Hellberg’s possible departure, however.

Nashville’s 2013 fourth round pick Juuse Saros has shown a lot of potential at only 20 years old and is likely to come to North America next season.

For what Saros lacks in size, standing at 5-foot-10, he makes up for in quickness and efficiency.

“He’s smallish but has very quick reflexes,” NHL Director of European Scouting Goran Stubb told NHL.com in 2013. “He’s difficult to beat up close to the net and he’s excellent on rebounds.”

If Saros does make the decision to play in North America next season — as he should — that would ultimately mean Hellberg’s time with the Predators would be coming to an end.

It may not be a bad thing for Hellberg’s career since he would be following in similar footsteps as Chicago Blackhawks goaltender Scott Darling. A victim of Nashville’s superb goalie depth, Darling hit the free agent market to be signed to a one-year deal with the Blackhawks. After outplaying Antti Raanta, Darling secured the backup spot behind Corey Crawford and received a two-year contract extension through 2016-17.

Hellberg has a lot of talent to go along with his large frame. Many teams lacking goalie depth will be looking to give him a shot in their system. Odds are, he will take advantage of it.

Subscribe to our Predators stories to get email updates every time a new story is published.

Colin Fitts is a Nashville Predators staff writer for The Hockey Writers. You can follow him on Twitter, @FittsTHW.