The final, non-goaltender, player in Sharks Previews and Predictions is the San Jose Sharks’ best option for their seventh defenseman. His name is Matt Tennyson—born in Pleasanton, California.

Other AHL defensemen saw time in the big leagues last season when the Sharks were suffering from the injury bug at the end of the year. However, none showed the skill and potential that the California native held.

Tennyson’s handedness prevented him from playing much at the end of 2014-15, but he has shown that he can hold his own in the NHL in limited time. There is a decent chance that he will be a stronger defenseman than Scott Hannan before he left the team. That will be a huge plus for San Jose.

Tennyson did not participate in many games last season, but he performed extravagantly despite playing with poor partners. No. 80 skated with the likes of Scott Hannan and Matt Irwin for the majority of his shifts, both of whom underperformed last season. The lone exception was when he played with Brenden Dillon on the second pair while Justin Braun was injured.

He wasn’t given the resources a seventh man needs to succeed, but he still managed to put up respectable numbers. 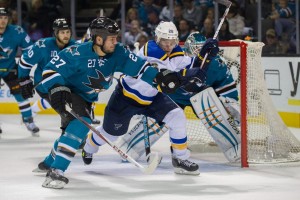 Eight points in 27 games is quite an achievement and is more than what Hannan and Mirco Mueller churned out in a larger amount of games. In fact, Tennyson earned just one less point than Dillon even though he played in 33 fewer contests.

His even plus/minus also ties him for fourth on the team in the category among Sharks’ defensemen. This tells us two things: that he was defensively competent, and that San Jose’s defense corp was terrible last season.

Playing in 31 career games is not a large sample size, but his data set is promising. At the very least, he should be a quality seventh defenseman.

The reason that Tennyson will be the seventh defenseman is because he shoots right handed. The Sharks have four, left-handed defenseman—Marc-Edouard Vlasic, Paul Martin, Dillon and Mueller—and just two right-handed blueliners—Brent Burns and Justin Braun. 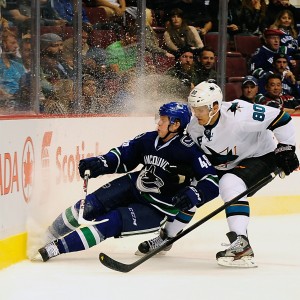 With the defensive group being so impacted on the left side, there is no reason for management to call up another lefty to replace someone in case of an injury. It will instead be a righty to fill the space.

Having his most competent partner from last year while playing on the third pair will help improve his numbers slightly. But since he will play in a small amount of games, the difference in points and underlying statistics will be difficult to notice.

Although he will see limited time, he will be a fantastic backup defenseman that can fill in during injuries or cold streaks. For once, San Jose’s blueline is stacked.