Paul Bissonnette Should Get A Shot At The Kings’ Roster

Paul Bissonnette, or Biznasty as most know him, has fallen off the NHL map. At the conclusion of last season, the then Phoenix Coyotes announced they would not be bringing Bissonnette back. After five seasons, seven goals, 21 points and 318 penalty minutes in 187 games for the Coyotes, Biznasty was without a job.

This season, after signing a professional try out agreement and appearing in eight games for the American Hockey League’s Portland Pirates, Bissonnette was again released. 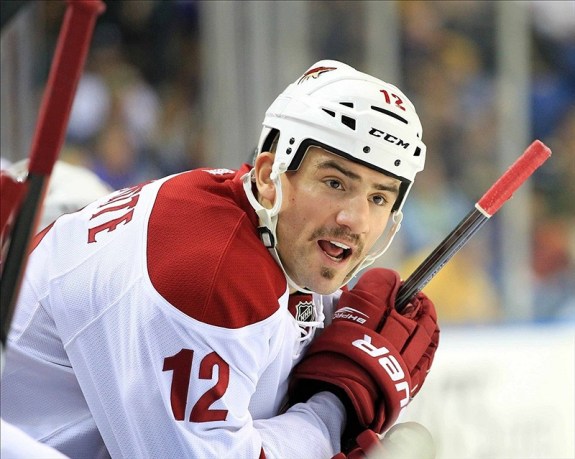 Then came the Los Angeles Kings.

Bissonette signed another professional try out agreement, this time with the Manchester Monarchs. This try out turned into a contract for the remainder of the season where Bissonnette is still apart of the Monarchs as they are in the midst of a playoff run.

During Bissonnette’s time with the Monarchs he has appeared in 56 regular season games where he has recorded one goal, seven points and 167 penalty minutes. Now ten games into the Monarchs’ playoff run, Biznasty has played in two games but has yet to get his name on the score sheet.

However long this run through the playoffs lasts for Manchester one thing is certain, Bissonnette’s contract will come to an end. The conclusion of Biznasty’s time in Manchester will bring about many questions. Should Bissonnette get a shot at the Kings’ roster, will likely be one of those questions. That should be answered with a stern yes and here’s why.

Bissonnette has 202 games at the NHL level under his belt. In those games Bissonnette has recorded seven goals, 22 points and 340 penalty minutes. Of course these stats don’t jump off the paper at you, and they shouldn’t. Bissonnette is a fighter this is no secret. But unlike a lot of fighters and even fourth line grinders that are in the line up more than not, Bissonnette is not a liability. I’m looking at you John Scott.

In Biznasty’s 202 games he has acquired a plus seven rating, grabbing a rating as high as plus six in 48 games with the Coyotes back in ’10-’11. In Bissonnette’s six seasons in the NHL he has only finished in the negative three times. Bisonnette can be put out there without his coach, his teammates and the fans cringing at what could happen.

Another interesting note on Bissonnette is two of his seven career goals have been game winners. Is that too little of a sample size to give the clutch label?

In an interview with Mayor’s Manor, Kings VP Mike Futa commented on what Bissonnette’s role with the Monarchs would be.

We just feel that we have a tremendous, young, group down there. Having another guy with some National Hockey League experience that can provide some positive – be even more positive, which is hard to imagine it being even more positive than the environment that they have down there already. [Bissonnette] is somebody who has worked hard to forge his career and I think he can be a good model for the guys down there, as well. He completely understands where we are going with this opportunity and it’s up to him to work hard to advance – either to extend the PTO or to provide himself an even better opportunity down there.

Getting dropped from the NHL to the AHL cannot be easy for a player at any time in his career. But Biznasty has welcomed the time with Monarchs and the opportunity to be there for the younger guys in the Kings organization.

Bissonnette should be rewarded for what he has done for the Monarchs and the community with a shot at the big club.

3. He Would Be Welcomed With Open Arms

For the first time in his career, Biznasty could be met with cheers rather than boos when he is skating at Staples Center.

The Kings have one of the most loyal and interactive fan bases in the league. Events like Hockey Fest are already go to events for Kings fans. Biznasty’s personality would put him among the longest lines at these fan based events, despite being a new name on the roster.

Outside of real life interaction Bissonnette has a social media following second to none in the NHL. Sporting a Twitter following of more than 652,000 people, Biznasty regularly interacts with fans on Twitter. Kings fans would welcome the interaction with a Twitter regular, compared to players like Drew Doughty, Anze Kopitar and Dustin Brown who all have accounts but use them sparingly.

Our Goalie couldn't hear the whistle because of crowd noise. The funniest thing I've seen in person at a hockey game. pic.twitter.com/8Cwzzssso5

Of course all of this isn’t saying Bissonnette should get the call up and play 60 or more games for the Kings next season. With players like Kyle Clifford and Jordan Nolan already taking a good amount of the physical game and the emergence of Andy Andreoff out of Manchester, it may be even harder for Bissonnette to crack the roster. But come time for training camp, Biznasty should get a shot and he may give the kids a run for their money.

Read Full Article on : Paul Bissonnette Should Get A Shot At The Kings’ Roster