Chris Chelios Back on the Ice for the Red Wings

At the age of 53, Chris Chelios is a little too old experienced to put a sweater back on, but he’s on the ice and he’s teaching Detroit’s defense some new things.

It was announced back in June that the Hall-of-Famer would be a part-time assistant for Detroit; he would be on the ice during practice and be eyes above (for a different view than the bench) during games.

Over the last three seasons, Chelios has had a similar role with the Grand Rapids Griffins. He served as an advisor and defensive coach for Detroit’s top defensive prospects.

“I think the great thing here is that I’m familiar with the players,” Chelios said to Chuck Pleiness of The Oakland Press. “It worked great in GR and now hopefully the same thing will happen here.”

His Return and What He Brings

Chelios was recovering from knee surgery when training camp started, but is back to lacing ‘em up and skating with Detroit’s blue line corps. 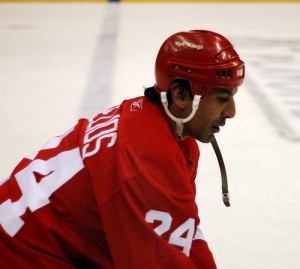 Chris Chelios brings a lot of insight to Detroit’s defense

The three-time Stanley Cup champion, three-time Norris Trophy winner and four-time Olympian sits 10th all-time in points for a defenseman, his offensive experience can open up the game for puck-movers like Niklas Kronwall, Alexey Marchenko, Jakub Kindl, Danny Dekeyser and newcomer Mike Green—who at just 30 years old, has a very respectable 363 points (113 G, 250 A) in 584 games; as well as a 30-goal season and two 70-point seasons.

“He sees the game still lots as a player; sometimes when you’ve been coaching for a long time you see the game as a coach. He gives us a different perspective as well,” Blashill said, also per Chuck Pleiness.

Defensively, Chelios finished his career with a plus-350 rating and only had a minus-rating in five of his 26 NHL seasons (which includes his minus-2, seven-game stint with the Atlanta Thrashers in 2009-10).

His defensive reliability should help all of Detroit’s blue-liners expand their knowledge of the game, defensive-positioning and opponent systems.

With the physicality and gritty edge that Chelios brought to the lineup, he should certainly have a big effect on players like Brendan Smith, Jonathan Ericsson and Kyle Quincey—when he returns from ankle surgery— who each play a mean, physical game themselves.

As one example, Smith wants to be tough against his competition. Going back to the 2014 playoffs when Detroit played Boston during the first round, Smith displayed some adrenaline courage when he attempted to fight Zdeno Chara; luckily for Smith, Chara just laughed it off.

In the hard-hitting series, Smith was trying to rally his teammates and was willing to take one (or a few) for his team when he thought Chara crossed the line.

Chelios’ career was full of questionable plays and in his book (Made In America), he talks about making opponents never want to go into the corner with him again, something Smith is most likely open to learning.

Ericsson, as another example, weighs 220 lbs. and stands at 6’5,” as the largest body on Detroit, he isn’t afraid to face-up competition either, displayed just last Sunday against Dallas when he took exception to a questionable hit by Ales Hemsky.

While the NHL that Chelios played in has certainly changed since his retirement, the concept of the game remains very much the same.

His curriculum for Detroit’s defense should help take some pressure off of goaltenders Petr Mrazek and Jimmy Howard in addition to breaking out, working the corners and recognizing the attacking opposition.

Read Full Article on : Chris Chelios Back on the Ice for the Red Wings