Boyd Gordon left the game for the Coyotes after the hit, and did not return. But the hit from Jake Muzzin altered the game. 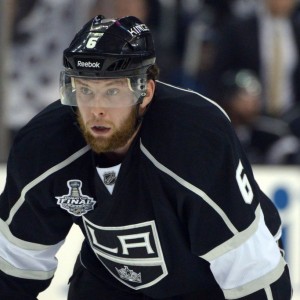 Up 3-1 in the 3rd with under ten minutes remaining Arizona forward Boyd Gordon went down to block a shot just inside the blue line. Kings defenseman Jake Muzzin came across and hip checked Gordon in the face creating a whiplash that sent Gordon’s head into the ice. Muzzin was called for a Match penalty leading to a five minute power play for the Coyotes. Arizona benefited further when Los Angeles defenseman Alec Martinez unintentionally sent the puck over the glass into the seats leading to a delay of game penalty and 5-3 advantage for the Coyotes ninety seconds later. Arizona scored two goals thirty seconds apart with under four minutes remaining to tie up the score. Both Kings goaltender Jonathan Quick and Coyotes goaltender Louis Domingue were able to fend off a few chances to take the game into overtime. Los Angeles refocused in overtime to get the win on an Anze Kopitar goal 36 seconds into the extra frame.  You can find the whole NHL recap here: http://www.nhl.com/gamecenter/en/recap?id=2015020524&navid=sb:recap&intcmpid=sb-highlights

Fortunately for the Kings, they were able to salvage a win, two points, and extend their Pacific Division lead. Fortunately for Arizona they were able to earn a point out of a game they were never really in. Muzzin could be out of the Los Angeles lineup if a suspension is handed out by the league. Gordon could be out significant time depending on the extent of the injury. It is important to note that Muzzin has no history of incidents. Gordon; however, does have a history of being injury prone.

As you can imagine, fan response was all over the place on the hit. With most Kings fans calling it an incidental hit, and Coyotes fans thinking that the call was correct. So what do you think? Was it clean or dirty? Should Muzzin be suspended?