As Told By The Players: Ryan Murphy’s NHL 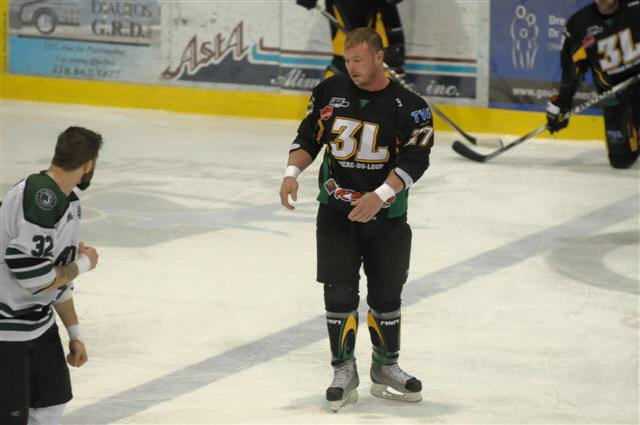 This is the first of a series of stories written by the LNAH players who tell them. Each story will be left in its original language, and with as little editing as possible. Therefore, the reader should expect some coarse language.

So it all started around Xmas in maybe 2010; I was playing senior on P.E.I. I was out shopping with my family and we were eating at Dairy Queen in town. I was waiting for our food and the newspaper was there so I’m looking through it and there’s an article about our league: Kensington picked up a player who was formerly from the tough Québec league LNAH and his first game was tonight against my team in Montague.

I wasn’t planning on goin’ to that game but as soon as I read that, I’m thinking: “they picked this guy up to fight me. Shit, I gotta go or I’ll look like a pussy!” So I tell the family to hurry up, I’m gonna be late.

I get to the arena and the warm up is on so I’m rushing. My coach comes right in and says: “he is here for you”. I’m sick to my stomach. Mad that they actually got some pro fighter to come fight me. Finally the fight happened. Centre ice. Drop the gloves. We went at it. Very good fight by both of us. I cut him good so there was lots of blood. I defiantly surprised him but that sort of paved the way.

My coach at the time, Bernard Cheverie, has lots of connections in the hockey world around here (LNAH). I was doin’ work at his house that summer and he says: “You interested in making a few dollars to fight? I said: “yep”. I was pumped. It became a goal of mine to be asked to play there. I knew I could fight but I was just a guy from P.E.I. Up there was a whole new ball game! 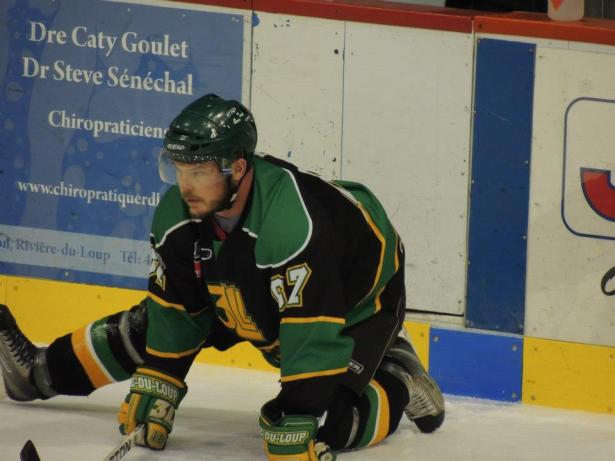 My first weekend up there (Rivière-du-Loup) I picked up three guys in Moncton and Fredericton and drove them up. It was preseason and on the way up, they’re talking about all this hockey they played etc..  I was ashamed ’cause I never played anything more than a little senior hockey. I was more interested in drinking and partying when I was younger than I was in playing hockey. Well I played but I wasn’t too into it, let’s say.

So listening to their stories on the way up, I was getting more and more nervous. I was thinking to myself: “WTF am I doing anyways? I don’t need this.”

But I had these guys with me, so I couldn’t turn around. I was sick to my stomach all weekend. I didn’t eat a thing ’till I got on the bus Saturday after my second fight. I think I lost ten pounds that weekend!  I was pretty naive on the bus going to the first away game in Jonquière. I remember in warm up looking at them. They were all huge in my eyes and then I saw Gaby (Roch). I could tell he was one of their tough guys so I said to my coach (Éric Dandenault): “that’s the guy I want”. He said “ok”. So I’m on the bench during the anthem and all of a sudden a raw chicken gets thrown on ice.

I’m thinking: “Hahaha these people are fuckin’ crazy!”. It was great. I got sent out on the ice, as did Gaby and we went at it. It was one of the better fights I had and it sealed the deal for me. I was on the team after that fight.

I’ll never forget how nervous I felt. Like what if they ask me to play. What do I say? That I’m not good enough to play this? Haha. I was more nervous I might have to play hockey than actually fight!

One experience I had the next year was in Thetford Mines. I fought Joël “The Animal” Thériault.  Very nervous for that one but eager at the same time. He fights open. Stands and swings and that’s my game so I knew it was going to be a good fight and it was. I remember in the middle of the fight he is talking to me and I’m thinking: “you crazy bastard. I’m 250 lbs and punching you”. He is cut over his eye and he is telling me to keep goin’ haha!

After the fight we’re both cut. We both need stitches but I refuse to go to the hospital. A guy comes in and says:

So I’m holding a towel. My blood is pumping from the fight still and this guy gives me five stitches, no freezing or nothing. As soon as he left the room I was alone and it was just like a wave went over me. The adrenaline was gone. I was in pain. I was in Thetford, alone. I just wanted to go home.

To top that night off we got back in Rivière-du-Loup at like 4 in the morning and we were staying at a cheap motel. The owner had screwed up and missed my room. His house was attached to the motel so I woke him up and he speaks minimal English. Finally here I am on a bed in this guy’s basement. Swollen face. Stitches. Pissed off. Tired. But at the same time I just fought a legend. The best there is. And I held my own so I was kind of proud of that beaten face! 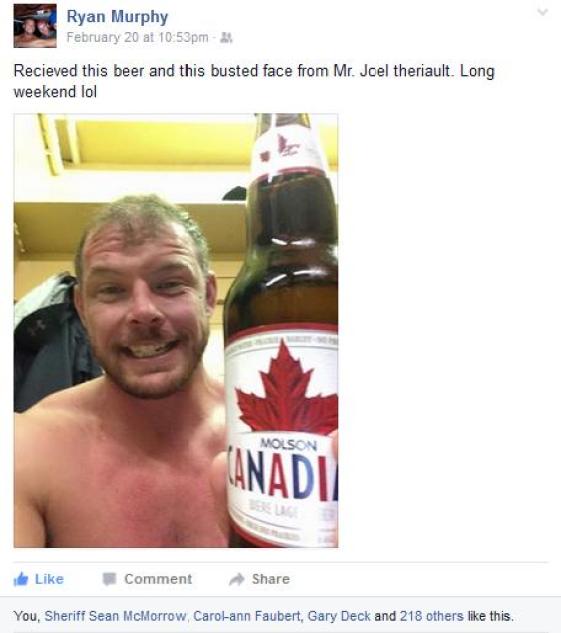 Post by Ryan Murphy after a more recent fight, which was the last of three very spirited bouts between the two men, who have tremendous respect for one another, over back-to-back games.

The best part of it is I was self taught. No boxing lessons. No nothing, just fighting at bars, mainly. Before I went to Quebec, I think I might have had three or four take your gloves off and square off fights before, so I think I did pretty good for myself. To just get the tryout alone was big for me.  I remember jumping on the bus after a game and Rick, my coach, says:

“Murph, come here.” He says: “when you’re fighting, where do you grab the guy?”

“You should grab their shoulder right here, then that makes it tough for them to hit you.”, he says.

I kind of shrugged and was like I just grab what I can get my hands on and start swinging, I don’t care if they hit me. Hopefully my punches hurt more than theirs! 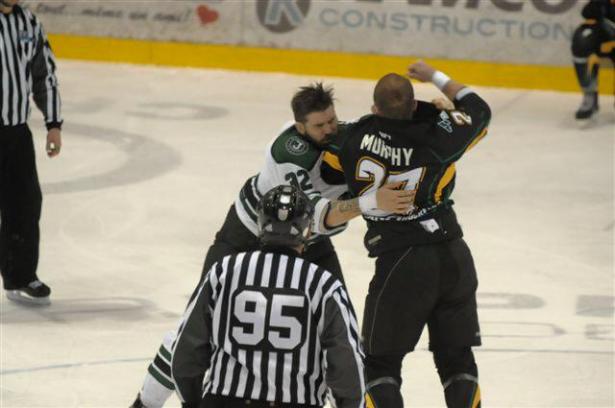 After playing there for the past few years I’ve learned the biggest fight is in your own head. The fight on the ice is the easy fun part. I don’t talk much before the fight. I just concentrate on what I’ve got to do.

My stomach flips. I feel sick. I’m sweating. As soon as I hit the ice, it’s like a ton of bricks are lifted off my chest.

I love that feeling. It happens when I’m about to do what I love!  My family hates that I do it but then I send home pics of an autograph signing or a fan that wants a picture with me. This is nothing I experienced before. Chiropractor in the dressing room. Someone to sharpen your skates. They even wash my undergear after every game. 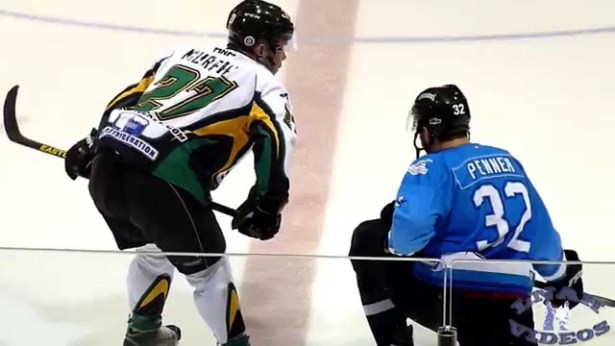 This is as good as hockey will ever get for me.

This is my NHL.

Read Full Article on : As Told By The Players: Ryan Murphy’s NHL