Jyrki Jokipakka Expected to Be Ready for Finland at World Cup

Calgary Flames defenseman Jyrki Jokipakka underwent hip surgery earlier this offseason but is expected to be ready to play for Team Finland at next month’s World Cup. 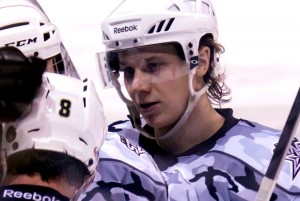 Jokipakka played parts of two seasons with the Stars to start his NHL career. (Ross Bonander/THW)

Jokipakka, 25, has previously represented Finland at the 2011 World Junior Championship and 2015 World Championship, playing in 14 games and tallying five points. The native of Tampere was named to Finland’s roster for the World Cup earlier this year, just before Flames president Brian Burke revealed Jokipakka had undergone hip surgery at the end of the regular season. At the time, Burke expressed concern about Jokipakka recovering in time to participate in the World Cup.

On Friday, Flames general manager Brad Treliving said he believes Jokipakka is ready for the eight-team international tournament which is set to begin play on Sept. 17.

“Everything looks good,” Treliving said. “He’s been training. He’s been skating. I think there are a couple final checks to do, but everything is looking positive.”

Jokipakka arrived in Calgary last season from the Dallas Stars at last season’s trade deadline– the team that drafted him 195th overall in 2011. In 58 games, Jokipakka tallied two goals, 10 assists and added 14 penalty minutes. During the 2014-15 season, he made his NHL debut with the Stars when he skated in 51 games and registered 10 points.

“Based on today (Friday) and based on the medical opinion, I would say it’s promising to likely that he be ready for that (the World Cup),” Treliving said. “That’s a goal. We were most concerned with getting him ready for Oct. 12 (regular-season opener at the Edmonton Oilers). But you can tell he’s put his work in and it looks like he’s going to have that opportunity.”

Read Full Article on : Jyrki Jokipakka Expected to Be Ready for Finland at World Cup