With his goal in the Vancouver Canucks’ 2-1 victory over the Edmonton Oilers on Thursday night, former Pittsburgh Penguin Derrick Pouliot became the first player in NHL history to have all five career goals be game-winners.

#Canucks Derrick Pouliot is the first player in NHL history to score 5 career goals, with all of them being game winners.

He was also the first with his first 4 goals being all GWGs.

Pouliot isn’t the only player traded from the Penguins this season to be successful on another team. Here’s a look at where those players ended up and how they’ve been doing away from Pittsburgh.

When the Penguins sent 2009 Cup-winner Jordan Staal to the Carolina Hurricanes, they got a top-ten pick in return. They used that to select Pouliot eighth overall in the 2012 draft. Pouliot had just finished an explosive season in the WHL with the Portland Winterhawks, where he’d racked up a ridiculous 59 points in 72 games and was considered one of the most valuable defensive prospects available. In the two years following, he continued to tally incredible point totals in the WHL, putting up 45 points in 44 games the season following his draft and then 70 in 58 games the next. 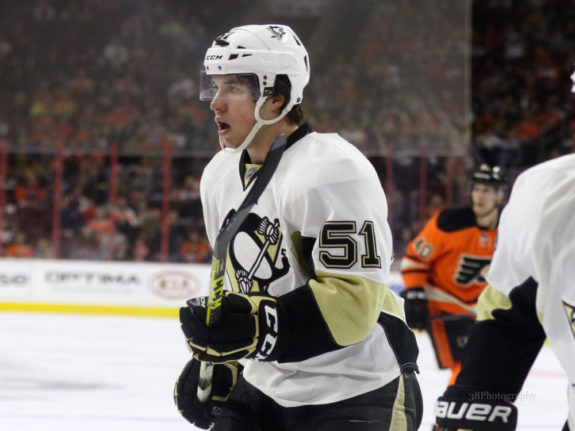 Pouliot with the Penguins. (Amy Irvin / The Hockey Writers)

Everything was set up for him to be the next great Penguins defenseman. But things didn’t pan out that way. His production totals faltered as he moved to the AHL— he didn’t approach the point-per-game pace he’d been enjoying in the WHL in any of his three partial seasons with Wilkes-Barre/Scranton— but he was still putting up numbers at a respectable clip.

It was in the NHL that his totals really dropped. In his 67 total games, Pouliot put up 14 points, two of which were his first game-winning goals. Finally, after five years of lingering in the Penguins system, never being fully used, Pouliot was traded to the Canucks in early October of 2017. 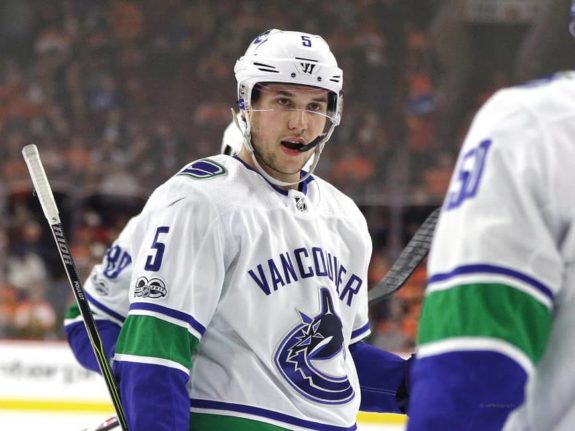 Pouliot with the Vancouver Canucks. (Amy Irvin / The Hockey Writers)

At the time of the trade, Canucks general manager Jim Benning told Sportsnet that “sometimes guys just need a change of scenery to kind of get their career going.” We’ve seen it work out in the Penguins’ favor before and this time it was in the Canucks’; Pouliot has finally played 67 games, almost a full season in the NHL. He’s gone from borderline AHL player to second-pair defenseman on an NHL team. He’s scored 21 points this season, three of which were game-winning goals.

The week before the trade deadline, Ian Cole reaffirmed that he didn’t want to leave Pittsburgh. “I’ve said it before, there’s nowhere else I would rather play,” he told the media. “No team I’d rather play for, no group of guys I’d rather play with.” And after four seasons and two full playoff runs with the Penguins— when he played the whole way through even though he suffered a broken rib and broken hand midway through the 2017 run— it was a believable sentiment. 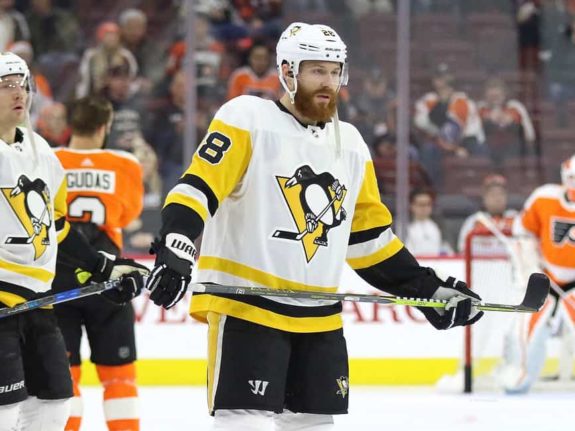 Ian Cole with the Penguins. (Amy Irvin / The Hockey Writers)

But that was all for nought. The next week, Cole was moved as part of the deal that brought Derick Brassard to Pittsburgh. The Ottawa Senators then immediately dealt Cole to the Columbus Blue Jackets.

Although Cole was more of a regular player for the Penguins than Pouliot was, his role change has been similar; he’s gone from being a borderline roster player in 2017-18 (Cole was frequently a healthy scratch in his final season with the Penguins) to being a regularly-used second-pairing defenseman. With seven points in 16 games for the Blue Jackets, he’s averaging over 0.5 points per game, almost double the rate he was hitting with the Penguins, where he tallied 13 points in 47 matches. 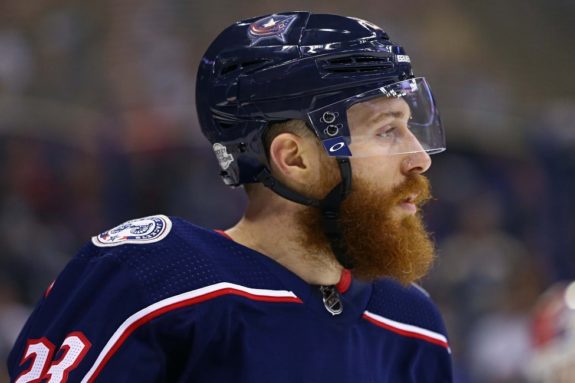 The Penguins will feel Cole’s loss most keenly in the playoffs. During the 2017 Stanley Cup run, Cole tallied nine points in 25 games— no small feat for a defenseman during the postseason— and was one of the Penguins’ most reliable defenseman in a year where they desperately needed one. If the Blue Jackets face the Pens in the first round, he most likely wouldn’t say no to getting a revenge goal or two against his former team.

Ryan Reaves was a standout in the Penguins’ locker room with his media-friendly personality. When he was moved onto the roster last summer, his role as a “protector” was also a deviation from the team’s usual roster-building strategy.

Reaves took to his role with relish. Even a month after being traded, his penalty minutes on the season (84) led everyone on the Penguins roster by far. A perennial fourth-liner, his ice time gradually dropped over the season, often averaging just five or six minutes a game on a fourth line that head coach Mike Sullivan trusted less and less to carry the play.

Eventually, Reaves met the same ending as Cole did; he was another player moved in the complicated Brassard trade, ending up with the Vegas Golden Knights in exchange for the Knights retaining part of Brassard’s salary from the Senators. 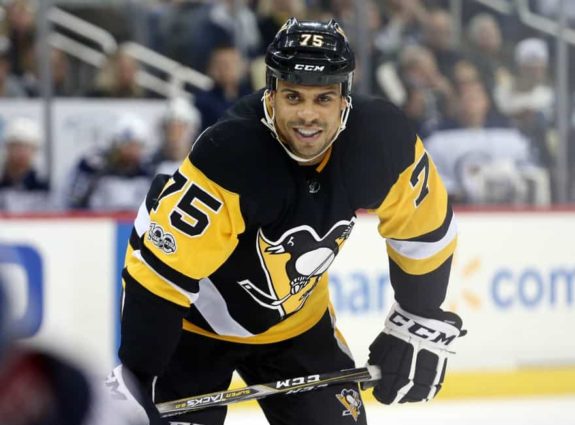 Reaves has a similar role in Vegas. He’s a fourth-liner playing under ten minutes per game and has tallied ten penalty minutes in 16 games. He remains an intimidating force against other teams; in the 2017-18 NHLPA player poll released earlier this year, Reaves took the “Who is the toughest player?” question in a landslide, winning the votes of 44.7% of participating players.

His penalties have already become an issue in Las Vegas. In late February, after multiple minutes in the box in the third period of a loss to the Los Angeles Kings, coach Gerard Gallant told the media that Reaves had apologized to him about the penalties after the game.

“I don’t want him to change his game,” Gallant said about Reaves after the loss. “I want him to go up and down. I want him to go to the net, play hard, finish checks, stay out of the penalty box — obviously, that’s a big thing.”

Scott Wilson broke through the barrier of being a borderline AHL player last year when he played just four games short of a full season with the Penguins. In his 78 games in 2016-17, he put up 26 points and 8 goals; in the 2017 playoffs, he tallied six points in 20 games on the way to the Stanley Cup. 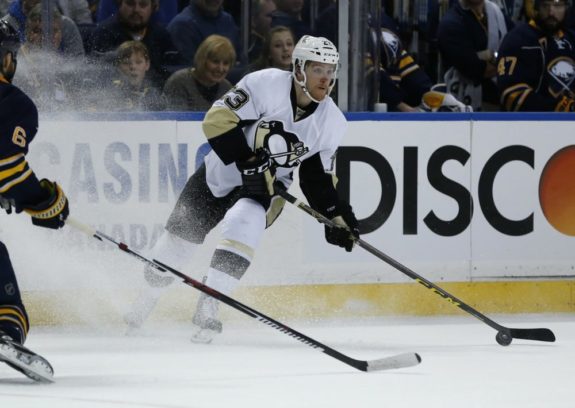 It looked like Wilson had finally become a regular part of the bottom-six after years of brief call-ups from the AHL. But after only three games with the Penguins this season, Wilson was moved to the Detroit Red Wings on Oct. 21 in exchange for Riley Sheahan.

Wilson spent 17 games in Detroit but didn’t see much action. In his time in Pittsburgh, he’d averaged about 10 minutes per game; that fell to seven with the Red Wings, where he went 17 games without a point. Two months later, Wilson was shuffled to the Buffalo Sabres. 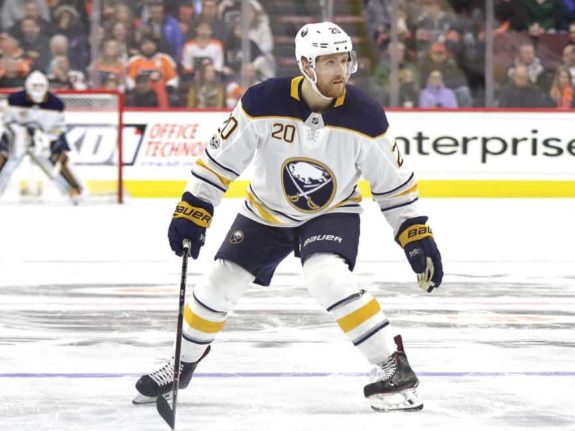 Scott Wilson with the Sabres. (Amy Irvin / The Hockey Writers)

In Buffalo, Wilson has assumed a role much like the one he had with the Penguins; he has a regular bottom-six roster spot, although with significantly more ice time than he did with the Pens at almost 14 minutes per game. His production with the Sabres evens out to what he put up over four years in Pittsburgh, with his average hovering at a consistent 0.30 points per game.

A borderline NHL player with the Penguins, Josh Archibald got the biggest chance of his NHL career when he was moved to the Arizona Coyotes in December. Before the trade, Archibald had only seen ice time in three games in 2017 with the Pens. But since his trade, he’s played 35 NHL games and scored 10 points and five goals. 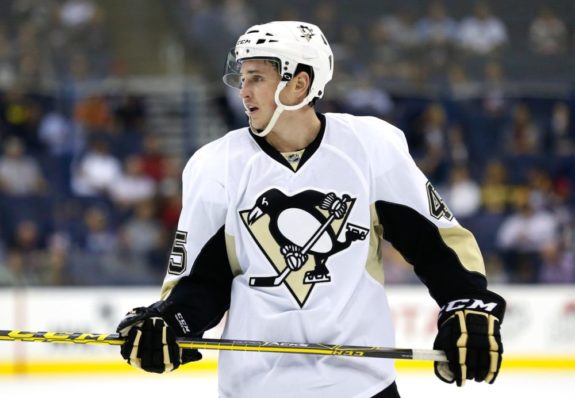 Archibald is also averaging slightly more ice time, hitting around 12 minutes as opposed to the ten he was averaging in Pittsburg. Much like Pouliot, being traded was his ticket to a more permanent spot on an NHL roster.

Who could forget Greg McKegg, the rhyming-est name on the Penguins roster? He served as a temporary third-line center this season. McKegg’s greatest career run in the NHL was 31 games with the Florida Panthers in 2016-17. He came close to matching that in Pittsburgh but after 26 games, in which he tallied four points, McKegg was moved at the trade deadline so that the Penguins could pick up another bottom-six center, Josh Jooris. 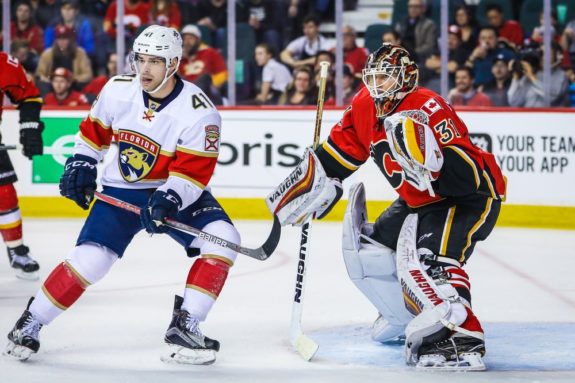 Since the trade, McKegg hasn’t cracked the NHL again but has slotted into the Carolina Hurricanes’ AHL affiliate in the Charlotte Checkers where’s he’s been putting up over a point per game at the AHL level with 13 points in 11 games.

The post Where Penguins’ 2017-18 Trades Ended Up appeared first on The Hockey Writers.