On Monday, The Hockey Writers will take stock of everything that happened in the Philadelphia Flyers organization in the previous week and how to use it to look forward to the week ahead. We will analyze the results of the games played and the impact they had on the Flyers’ playoff aspirations, which players were all over the stat sheets, and we’ll take a deep dive into social media to find the post of the week.

Not only will we look back in time but we’ll also take a peek at the important information needed for the week ahead. What challenges do the upcoming opponents pose to the Orange and Black? Which players have a history of success against the looming adversary? The Flyers’ top prospects will also get featured in both sections as they gear towards making an impact in their postseasons. 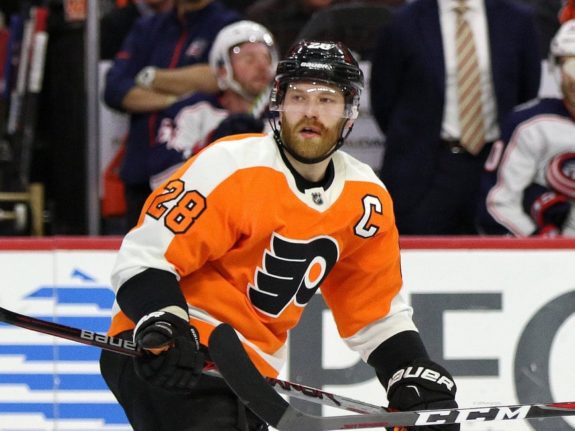 The Week That Was for the Flyers

The Flyers finished their last road trip of the season by getting points in all three games. The Dallas Stars ended their eight-game losing streak when Alex Radulov scored 40 seconds into the overtime to beat Philadelphia, 3-2. The Flyers bounced back by beating the Colorado Avalanche the next night, 2-1. In Colorado, Michal Neuvirth returned after missing 18 games with lower-body injury but, of course, left at only 8:07 into the second period with another injury. The week ended with a dramatic 4-3 overtime win at home against the Boston Bruins, which prevented the Bruins’ first season sweep (1-2-0) of the Flyers since 2014-15.

The Flyers’ top defensive duo was on fire this week as Shayne Gostisbehere and Ivan Provorov combined for two goals and eight points with 11 shots on goal and 19 blocked shots. It was also another great week for Claude Giroux, who is on a seven-game scoring streak and has now set a new career-high in points (95), goals (29) and assists (66). He also was the main attraction in the Social Media Post of the Week below with the On the Bench Crew.

In OHL playoff action, Morgan Frost and the Sault Ste. Marie Greyhounds moved onto the second round when they swept the Saginaw Spirit. Frost had three more assists to give the first-round pick seven points in four games.

What to Watch for This Week

The last week of the season is filled with three games, two at home and one on the road but, more importantly, all are against teams not in playoff contention. The motivation will be there for the Flyers to clinch a spot but it will also be there for the teams and division rivals who are on the outside looking to be the spoiler.

The week begins with a road contest against the New York Islanders that could be the second-to-last home game for John Tavares. The Flyers have points in five straight games played at the Barclays Center and they are 13-4-3 in their last 20 playing on the road in New York. This season series has been a close one as both teams have scored 13 goals and the Islanders have a slight edge in shots on goal (107-100). Special teams have been key, as the Flyers’ power play is four-for-eight while their horrid penalty kill has given up four goals in nine Islanders power-play opportunities. Claude Giroux has 47 career points in 44 games played against the Isles, which is the most he has against any opponent.

The Orange and Black’s two-game homestand to end the season starts with a matchup against the Carolina Hurricanes. This has been another close season series where both teams have scored seven goals as the Flyers have won two of three previous matchups. They have been red-hot at home, and that includes a 13-4-3 record in their last 20 games played in Philadelphia against Carolina. Wayne Simmonds has been on track against the Hurricanes with 24 career points in 27 games played. His 0.89 points per games against the Canes is the highest against any opponent. 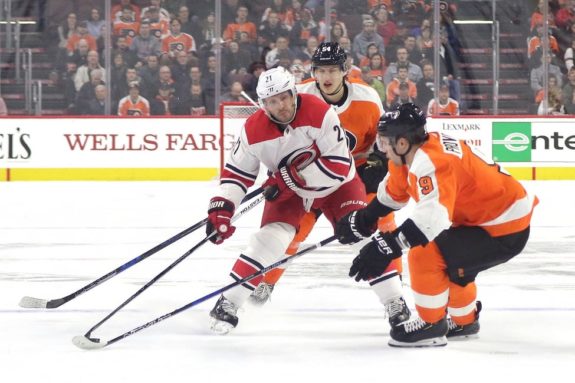 The finale of the 2017-18 Philadelphia Flyers is a matinee against the New York Rangers on Saturday, April 7. Let’s just hope it doesn’t come down to a shootout to decide if the team makes the playoffs. Once again, the oddity of both teams scoring the same amount of goals (12) in the season’s series continues. The Flyers’ MVP, Giroux, has done some major damage to the Blueshirts this season, with six points in the three games played, and for his career, he has 42 points in 48 games played. That will have to continue for the Flyers to finish the season strong.

If you’re looking for some more midweek hockey, the AHL Lehigh Valley Phantoms play Tuesday and Wednesday at the Charlotte Checkers. They finish up a four-game road trip with a Saturday game at the Hartford Wolfpack and a Sunday game at the Providence Bruins. Keep an eye on a red-hot goalie Dustin Tokarski, who was 6-1-1 with three shutouts and a 1.94 goals-against average and .931 save percentage in March.

The NCAA Frozen Four is set to drop the puck on Thursday, April 5 with some Flyers connections. The Ohio State Buckeyes, led by Tanner Lacynski (their sixth-round pick of the 2016 NHL Draft), take on Minnesota Duluth in one semifinal. The Michigan Wolverines, who have recently traded Flyers prospect Cooper Marody and current prospect winger Brendan Warren, take on Notre Dame in the other semifinal. The 2018 NCAA Frozen Four champion will be crowned on Saturday, April 7.

The post Philadelphia Flyers’ Monday Must Read appeared first on The Hockey Writers.