Michael Grabner: From Rags to Riches

Just prior to the NHL trade deadline Michael Grabner became the first player to be involved in a deal between the New York Rangers and the New Jersey Devils and due to the proximity of the teams, some of the normal adjustments didn’t have to be made that normally would during a midseason swap. Grabner has come as advertised – speed for days, a solid penalty killer, and a penchant for finding himself on breakaways.

Thus far the goals and points haven’t come for the player, but the team has still been successful since adding him to the roster without subtracting one from it. “Grabs has had lots and lots of opportunities. You can’t control the puck going into the net but you can control your ability to get yourself into those situations to be able to score,” Devils head coach John Hynes said after his team’s 4-3 victory against the New York Islanders. “It’s nice to be able to see him play the game, use his speed, and get the scoring chances. If he continues to play that way he’s going to get more scoring chances and then the odds are, that he’s going to score.”

OFFICIAL: The #NJDevils have acquired forward Michael Grabner from the Rangers in exchange for a 2018 2nd Rd. Pick and prospect Yegor Rykov. pic.twitter.com/muRtpW4oJn

Despite his lack of offensive production – 5 points (2g-3a), one game-winning goal in 18 games – the Devils know that when he pots his next goal, it could be followed by a bunch more. With the magnitude of games rising, that would be an added bonus for a team that has been able to score goals most nights this season.

“His track record is, he can score goals – 5-on-5 and on the penalty kill,” Hynes told The Hockey Writers. “He’s good in those situations and I think when you look at his track record – yes, he can be a little bit streaky. If one or goes in, it could turn into five or six in a row.”

Two of his five points have come on New Jersey’s penalty kill – which is half of his shorthanded total in 135 games with the Rangers over a year and a half, and he’s added another speed dimension to an already dangerous PK that leads the league in shorthanded goals (12). “He’s getting the chances and he’s done well with our PK, he’s been responsible. I’m sure it’ll be similar to what happened to me and they’ll start to fall at some point here,” said Devils rookie Blake Coleman, the team-leader in shorthanded goals.

MICHAEL GRABNER DOES IT ALL HIMSELF AND SCORES A BEAUT OF A SHORTY! pic.twitter.com/D3direifDS

“It was pretty seamless (adding him to the PK, team), we didn’t have too many talks about it. He’s been doing this a long time and fit right in to our system,” he said of Grabner’s addition. “Speed is our biggest attribute on the PK and we brought in another player that can get up and down the ice, he’s done a really good job. He’s got game-changing speed, all he needs is one break a game and if he puts that away — it’s a huge difference-maker.”

THW spoke with Grabner following the win over the Islanders to talk about a variety of topics including the playoff push, changing teams, and possibly being Miles Wood’s idol.

The Hockey Writers: You’ve been with the team for a little over a month now, are you feeling totally adjusted to the situation where you can just play hockey now?

Michael Grabner: Yeah, I’m just trying to do what I can out there to help the team. Obviously scoring, for me personally is not going great, but we’re still finding ways to win. I try to work hard on the PK and I think that’s been a big part for us the last few games here. We’re winning games. It’s going to be a big part in the playoffs too. Our special teams need to be good.

It’s been pretty good from the start, I think the guys were good when I got here and made it easy for me. It’s not far from home, I know the area and that makes for an easy transition. 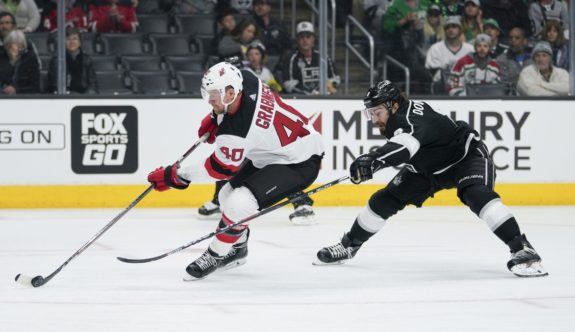 THW: Even though you’re not scoring goals you are getting chances though and that has to be encouraging right?

MG: Exactly. That’s what I mean (smiles), they’re just not going in. It’s frustrating personally, but as long as I’m getting chances I’m doing something right. I just have to keep working.

THW: Did you completely relocate or stay in the same spot when the Rangers traded you to the Devils?

MG: I was living in Rye, New York, but now I’ll stay in Hoboken, New Jersey too. I’ll go back and forth, and on off days go home because my kids are out there with their school and stuff.

THW: You’ve played for a few teams in your career, including the team you played tonight the Islanders. Do you still have sentimental feelings when you play these teams or is that not an issue for you anymore because of the frequent changes of address?

MG: You do (still have those feelings), there are still a bunch of guys on that team that I played with – I was there for a few years. You still have a lot of memories and good people that you met there, so you always look forward to those games. Even Toronto, I only played there one year but I still made some good friendships and you always want to beat those guys when you play them. 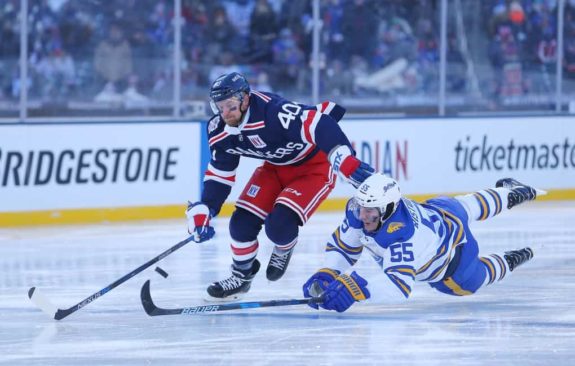 THW: This is like homecoming week for you…Isles tonight, Rangers on Tuesday, Leafs on Thursday…

MG: I know yeah (laughs), it’s a good stretch here for my old teams. But there are big points for us on the line.

THW: Recently on the Devils All-Access Podcast your teammate Miles Wood said that when he was a kid his dad told him to watch you playing with the Islanders to learn about speed and explosiveness. He also said that you two haven’t raced yet, and that he ties the laces on his skates just like you do ever since he was a kid. Have you and him talked about this yet?

MG: I saw that (he ties his skates that way), I didn’t know it was because of me. But obviously, that shows how old I’m getting, haha! If he was watching me as a kid…he’s a great skater and I’m glad he’s on our team. He’s definitely one of the fastest guys in the league, it’s nice to have him on our side.

On the new #NJDAllAccessPod we chat with Miles Wood! Miles opens up to ya and let’s his personality shine through and he shares a secret about Michael Grabner! Find out more about the man behind the speedy skates on the latest episode! https://t.co/c5ie0eIL1Y

THW: It appears that your team is peaking at the right time with the playoffs on the horizon, with wins in four of the past five and nine of ten points…

MG: You want to go into the playoffs on a good note, obviously we’re still fighting for it and every point matters to us; we can’t take our foot off the gas. We’ve had a nice little run but we still have a lot of hockey left before the playoffs and we need to end this season on a positive note.

THW: The two of this games against the Islanders in New Jersey this year have been pressure-packed: the first on Patrik Elias night (your first game with NJD) and then tonight with a chance to move five points up on Florida in the standings. Was there more pressure in one or the other?

MG: Both really, it’s a game against a rival and the first one was a big night for Patrik, tonight – we needed those points. There are no easy games this time of year. It’s the best time of the year and what you work 82 games for. I think we’re all enjoying this.

THW: Blake Coleman said the other day he’s been scoring a lot more goals since he gave up no. 40 to you and took no. 20, maybe he owes you some money or something?

MG: (laughs) Yeah, exactly. It’s worked for him, hopefully, he’s not too mad he had to give it up.

The post Michael Grabner: From Rags to Riches appeared first on The Hockey Writers.

Read Full Article on : Michael Grabner: From Rags to Riches