3 Thoughts of a Fan at a Toronto Maple Leafs Game

The date was Thursday, March 26th, 2015 when I made the difficult journey to downtown Toronto to watch the fumbling Maple Leafs take on the surprisingly competitive Florida Panthers.

Despite living in just outside of Toronto, approximately a 45 minute drive in fact, I have never been a strong supporter of the Maple Leafs and their on ice product, especially this season. However, having been to only a couple of games over the years, I decided to buy tickets to see a game.

Fortunately for me, I was able to receive a decent discount (not surprisingly) on some tickets for a pair of quality seats. Don’t get me wrong, in terms of the off-ice experience of a Leafs game, the overall quality and experience of a game in the Air Canada Centre is second to none. However, when it comes to the on ice product being sold in downtown Toronto, it is safe to say that all of the fans in attendance should have received a refund, if not a formal apology.

Although I personally did have a fun time at the game, here a three things that caught my eye as a fan, plus my take on Casey Bailey’s first NHL game.

1. The Poor Atmosphere of a Maple Leafs Game

Despite the slogan: “the passion that unites us all”, I saw little passion if any from the “Leafs fans” in attendance on Thursday night.

That’s not to say that there aren’t diehard, loyal supporters of the Leafs out there, however those who paid decent money and allotted their time to see the Leafs play certainly did not appear very enthusiastic towards their home town team.

On top of this, the building was eerily quiet. At some points, if not for the blaring loud music playing in between whistles, you could arguably here a pin drop. Cheering, interest and excitement in general were noticeably absent, along with a vast number of potential fans in empty seats.

2. Has Phil Kessel Given Up? 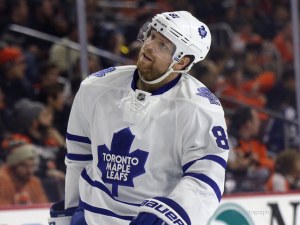 Yes, its been a long season. Yes, there are less than ten games left this season, and yes, Phil Kessel is slated to earn an average of eight million dollars over the next seven seasons.

This begs the question: what possible reason could Phil Kessel have for showing little to no drive or passion in his play? The answer, there is none. Everyone in the hockey world is well aware of the Leafs’ struggles this season, yet despite the team’s poor play, there is absolutely no excuse for the Leafs’ supposed star player to glide his way into the off-season.

As a leader on the team, Kessel should be relentless and motivated, characteristics which would do well in guiding the many young Leafs currently on the roster. However, it appears that Phil could care less. Yes, he appears frustrated in the media, but his on ice play, has been lacking the same urgency for quite some time now.

3. Morgan Rielly is a Stud

Is it just me, or does Morgan Rielly look like the future captain of the Toronto Maple Leafs?

This was my first time watching Morgan play at the NHL level, and boy was he impressive. Throughout the entire game, Rielly was consistently playing to the fullest of his capabilities, and was one of the few Leafs players on the ice who appeared to be giving his all throughout the entire 60 minutes.

This was illustrated in Morgan’s play on the Leafs’ lone golf of the evening. After breaking out of his own zone with the puck, Rielly made his way through the Panthers’ defense rather easily, before he made a tremendous pass to Sam Carrick who netted his first NHL goal.

Fortunately, I was able to take in the first NHL game of NCAA star Casey Bailey, who recently signed a two-year entry level contract with the Leafs.

Since it was his first NHL game, I wasn’t expecting a whole lot from Bailey, who logged 11:49 of ice time. In that time, he registered one hit and one giveaway but also saw some time on the Leafs’ second powerplay unit.

Did he look out of place? I wouldn’t say so. In terms of his size, Casey compared fairly to the other seasoned NHL players on the ice. As is usually the case with young players, Bailey would do good to add greater strength to his game, as at times it appeared fairly easy to knock Casey of the puck.

All in all, I personally thought Bailey had a solid NHL debut. Good size, speed and vision alongside a great shot are what Bailey is known for, and although he failed to register a shot, it was easy to see that Bailey has a high hockey I.Q and is tremendously smart with the puck.

Read Full Article on : 3 Thoughts of a Fan at a Toronto Maple Leafs Game