2009 Draft is Key for Avalanche

When it comes to the draft in any major league sport, there is no such thing as a sure thing and the NHL is no different.  Players that are highly sought after before the draft may or may not pan out to be the star that is expected of them as their careers play out.  On the other hand after the draft is completed a team may look back at the draft several years later and be very happy with what they see.  The 2009 draft is a draft the Colorado Avalanche are very happy with and it continues to pay huge dividends six season later.

When the Avalanche entered the 2009 draft they held the third pick overall.  This was the highest the Avalanche organization had selected a player in its 14 years in Denver.  The number one prospect in this years draft was John Tavares who was expected to be selected by the New York Islanders.  Then there was Victor Hedman, the top defensive prospect in the draft and after this was Matt Duchene from the Brampton Battalion.  Tavares was basically a slam dunk on where he would end up but it was not a sure thing what the Tampa Bay lightning would do with the second overall pick.  Either way, the Avalanche were set to get a highly sought after prospect that would change there organization.  The question was would it be a top flight defender or a speedy forward with skilled hands? 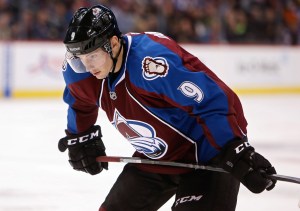 When the Lightning announced they went the route of selecting Hedman a smile was noticeable on Duchene’s face.  It appeared then that he would be joining the team he cheered for as a child and sure enough that is exactly what happened as Avalanche General Manager Greg Sherman announced Duchene as there selection.

Since his selection in the 2009 draft Duchene has played for the Avalanche each season spending no time in the AHL.  He currently has played 419 games as a member of the Avalanche and has 318 points in the span.  Duchene has grown every year in his play and it is noticeable on the ice.  Currently Duchene is in the middle of a five year contract extension that keeps him tied to the Avalanche until 2019.

After selecting Duchene the Avalanche knew they had the 33rd overall pick which, like the first round, was third overall in the round.  The Avalanche organization knew exactly who they wanted to pick and despite there excitement for this player they believed trading up to get him was not necessary.  It turned out, they were right.  When the Avalanche were asked to make there pick Ryan O’Reilly was still available so the Avalanche called his name.  The second round of the draft is where teams can find hidden gems and man did the Avalanche hit this hidden gem out of the park. 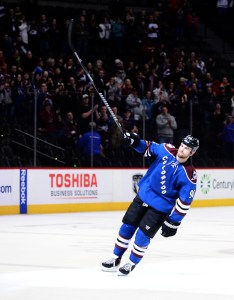 O’Reilly’s only downside since his draft year has been his contract battles off the ice.  After completing his entry level deal O’Reilly held out during the lockout shortened 2012-2013 season. The Avalanche were forced to match an offer sheet presented from the Calgary Flames to keep O’Reilly.  Despite there unwillingness to pay O’Reilly what he wanted, the Avalanche matched the offer sheet the same day it was presented.  Between the lock out and the hold out O’Reilly only played 29 games that season which was a season anyone associated with the Avalanche just assume forget.  When that two year deal expired after last season the Avalanche and O’Reilly decided for arbitration on a new deal because again, the two parties were on two different levels in what O’Reilly should be paid.  When the arbitration date was set both parties arrived at the arbitration office and agreed on a deal literally outside the arbitrators door minutes before the hearing.

In his time with the Avalanche O’Reilly has played in 427 games and amassed 246 points.  O’Reilly has lead the league in takeaways several times in his young career and even won the Lady Byng trophy last season, which is awarded to the player who exhibited the best type of sportsmanship and gentlemanly conduct combined with a high standard of playing ability.  O’Reilly has one year left on his deal and it is safe to assume signing him long term is a key aspect to this off season for the Avalanche.  If they can not get O’Reilly locked up to a long term contract look for the Avalanche to field trade offers for the upcoming Unristricted Free Agent (UFA).

The Avalanche had a second selection in the second round which was 49th overall in the draft.  With this pick, the Avalanche picked defenceman Stefan Elliott, who of the names mentioned in this story is the most back and forth as far as play and effectiveness.  It is no secret it takes defenceman longer to develop to being NHL ready and Elliott has proven this to be true.  As Duchene and O’Reilly made the Avalanche roster their first season and have been staples ever since, Elliott has found it difficult getting playing time and staying in the lineup long term.  While Duchene and O’Reilly both have over 400 NHL games a piece Elliott has only played in 63 games in the past six seasons.

Elliott is not one of these large shutdown defenceman as he is only 6 feet tall, however he is also not one of the smaller size, speedy jump up in the play type of defenders either.  He finds himself in a unique spot with his size and with which type of player he wants or needs to be.    Elliott has only scored 6 goals in his time with the Avalanche but has seen some NHL action in each of the last four seasons.  Elliott is the dark horse of the players drafted in the first three rounds for the Avalanche.  Elliott is a Restricted Free agent now that this season is over and it is unclear on what the Avalanche organization plans to do with him.  To add insult to injury for Elliott, in the third round the Avalanche drafted another defenceman who is on the edge of being one of the best puck moving defenceman in the NHL.

With their only selection in the third round the Avalanche selected defenceman Tyson Barrie, 64th overall from the Western Hockey League.  Like Elliott, Barrie did not make the Avalanche roster his first season but as a third round pick nobody expected him to.  Barrie would not play for the Avalanche until the 2011-2012 season and even then he would only see 10 games of NHL action before being returned to the Lake Erie Monsters, the AHL affiliate of the Avalanche at the time. 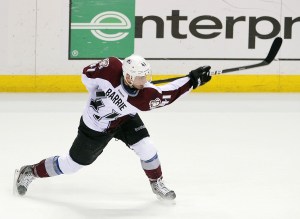 For the next season and a half Barrie would bounce back and forth from the Avalanche to Lake Erie.  However, under coach Patrick Roy Barrie exploded onto the scene early in the 2013-2014 season which was a year that everything went right for the Avalanche.  Barrie would play 64 regular season games that year, his most in a single season by a long shot.  More importantly in those 64 games Barrie scored 13 goals and added 25 assists as a puck moving defender who had the green light to jump up into the play whenever he saw fit.  Coach Roy understood this left his team susceptible to odd man rushes the other way but, he knew this was the type of game Barrie was born to play.

When the season began a lot of people expected the Avalanche to miss the playoffs, even fewer people guessed that if the Avalanche made it to the playoffs that losing Barrie would be one of the largest blows sustained by the team.

The illegal knee by Matt Cooke would end Barrie’s season and cause Cooke to be suspended for the next seven games of the playoffs.  The good news for the Avalanche is that Barrie returned for the 2014-2015 completely healthy and picked up right where he left off.  Barrie played in 80 games this past season and collected 53 points, his most in one season as a member of the Avalanche.  Barrie is currently under contract for one more year and all signs point to him being a member of the Avalanche for years to come.

While these were not the only players selected in the 2009 draft by Colorado these four have stayed with the organization and three of them are staples in the lineup.  Beyond the NHL, Duchene, O’Reilly, and Barrie are all currently on Team Canada’s roster for the World Championships.  Canada is undefeated so far and all three of these guys have produced points in the less than three games they have played.  Duchene is currently Team Canada’s top point getter with two goals and three assists.

Again both Barrie and O’Reilly are on the last year of their respective deals and the Avalanche will certainly look to resign both of them sooner rather then later.  These guys next to players acquired via trade, free agency and other draft years, set the tone for what the core of this young Avalanche roster has, and will look like in years to come.  The future of the this team is the brightest it has been in many years and if these guys can stay healthy and continue to produce at the levels they have so far the rest of the league better be on notice that the Avalanche are going to be very good for many years to come.  And it all started with that draft back in 2009.

Read Full Article on : 2009 Draft is Key for Avalanche