Dylan Larkin has been the talk of Hockeytown since joining Detroit’s AHL affiliate the Grand Rapids Griffins just nine days ago. 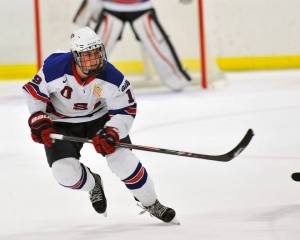 Larkin immediately joined the Griffins after signing a three-year entry-level contract following a bronze medal performance with Team USA at the World Championships. He has put up two goals and two assists for the Griffins in just four games and seems to be racing Tyler Bertuzzi up the depth chart.

Bertuzzi, 20, is the nephew of former Red Wing Todd Bertuzzi and draws comparisons with his hard-nosed style of play and ability to finish. His gritty game has replaced that of the Griffins’ Mitch Callahan who went down with an ACL injury earlier this season.

“(Bertuzzi) wins puck battles, he goes to the net hard, and he has the ability to play with good players. He’s been giving us a lot of everything,” said Griffins coach Jeff Blashill, per Ted Kulfan of The Detroit News.

The six-foot, hitting machine was drafted in the second round, 58th overall by the Detroit Red Wings in 2013. Bertuzzi had an impressive year with the OHL’s Guelph Storm. He tallied 35 points (9 G, 26 A) in 29 games and added another five goals in four playoff games.

Then Tyler Bertuzzi joined the Griffins late in the season and quickly found his stride. He managed to score a goal in one of his two games played during the Griffins’ regular season.

Getting Gritty With the Griffins

In the Calder Cup Playoffs, where the Griffins currently hold a 2-2 series tie with the Vancouver Canucks’ affiliate the Utica Comets, Bertuzzi has continued to display his growth.

“(Bertuzzi) has been really good,” Blashill said. “He’s come in and he’s another guy whose game fits the playoff type of hockey that we’re in.”

In 12 playoff games with the Griffins, Bertuzzi has scored seven goals and added four assists for 11 points, third on the team. He also stands second on the team in goals and plus/minus with a +6 rating, showing a great defensive-mind.

The Red Wings have a lot of offensive depth and the preaching of patience means he still stands a few years away from pulling on the Winged Wheel for Detroit. But he has developed fast and may be a large factor for the Wings when he does make the leap to the NHL.