Though Arizona coach Dave Tippett refuses to look beyond Wednesday’s home game with Vancouver, all indications point to an important week. With three Pacific Division opponents directly ahead on the schedule, the temptation remains to identify these games as critical.

After all, there are two months remaining in the NHL season and a plethora of strange things can happen. At this point, Tippett is saying the politically correct things and only taking, as the common phrase is concerned, “one game at a time.”

With the Canucks directly ahead, the Coyotes stand three points from a playoff spot in the Western Conference. While teams like the Avalanche, the Wild and the Predators all stand in the way, clubs which the Coyotes need to worry most about lay in their own Pacific Division. The top three teams in each of the four NHL divisions qualify for the Stanley Cup playoffs, and in the Pacific Division, the race will likely come down to the Sharks, Ducks, Coyotes and the Canucks for two playoff slots. The Kings hold down first place in the division and, coming into play Tuesday night, L A. held a nine-point division lead over the Sharks.

For now, the Coyotes are trying to snap a four-game losing streak while, at the same time, address a critical issue. One malady plaguing the Coyotes is killing penalties. That segment of special teams just took a tough hit because Boyd Gordon, one of Arizona’s top penalty killers and a master of winning face-offs, is out with an upper-body injury. At this point, Gordon, injured last Thursday night at home against Chicago,  is week-to-week, and Tippett said there is no certain timetable for his return.

Gordon’s loss means Tippett will be challenged on two fronts. First, the coach must find a suitable replacement for critical face-offs, and also juggling penalty-killing personnel. The first response is that current roles of players could be expanded to compensate for Gordon’s loss. 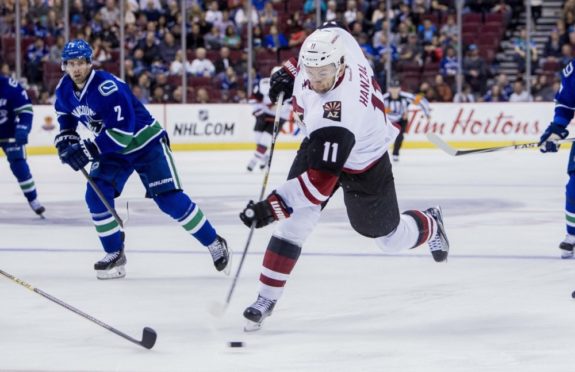 “I don’t think that’s the case,” said Jordan Martinook after practice Tuesday in the Gila River Arena. “My role (as a main penalty killer) is not impacted and I’ll have the same responsibilities as before. What may change is other centers on the art of winning face-offs.”

Here, Martinook referenced Brad Richardson, Martin Hanzal and Antoine Vermette all shouldering the additional task of controlling the puck from the draw. While this may be an important aspect of winning battles in the face-off circle and ultimately gaining control in the Coyotes’ end of the rink, the larger question of special teams play continues to haunt this team.

While Tippett said addressing the penalty-killing issue starts with the goalkeeper making saves, the game, for the Coyotes now, may be more physical than mental.

“We have to recognize that the time is now to bear down,” said defenseman Connor Murphy. “We need to cut down on the mental lapses. The game now is tighter. On the PK, we need to get more pressure and to concentrate on our work ethic.”

Help Is On The Way

To compensate for the loss of Gordon and enhance the penalty-killing effort, the Coyotes recalled winger Tyler Gaudet. From AHL Springfield, Gaudet, a 22-year old out of Hamilton, Ont. is coming off an injury that sidelined the winger for a few weeks. Proclaimed healthy by Tippett after practice Tuesday, Gaudet is expected to take Gordon’s place in the lineup, kill penalties and control face-offs with his right-handed shot.

This is Gaudet’s second stint with the Coyotes this season. Earlier, he averaged 12:37 ice time per game and recorded one assist in five games skating for Arizona.

Coming into the Vancouver game, the Coyotes are 29th in the NHL in killing penalties (at a 76.8 percentage clip), last at home (71.7), and last in the league in allowing short-handed goals with 10. All of which points to a heighten sense of urgency.

“Starts with the Vancouver game, and that’s our focus,” Tippett said after practice Tuesday. “Then, we’ll take it from there. Vancouver is in the same predicament as we are, and that’s scratching and clawing for a playoff spot.”

By the end of the week, and after division games against the Canucks, Flames and Sharks, the Coyotes’ sense of urgency could really be on high alert.