The Fallout of the Patrick Sharp Trade in Chicago

My THW colleague, Ed Sarno recently completed a terrific interview with Notre Dame Head Coach Jeff Jackson on the play of Stephen Johns. In it, he mentions how Johns made his NHL debut against the Chicago Blackhawks just days before he was given a confidence-boosting two-year contract extension by Jim Nill in Dallas. An interesting side story in the discussion about Johns making his debut against his former team is why he ended up in Dallas in the first place.

That story, of course, would have to involve the trade that sent Johns and Patrick Sharp to Dallas for Trevor Daley and Ryan Garbutt this past summer. In the midst of a difficult salary cap situation, Stan Bowman was forced to trade Sharp in an effort to clear cap space for the upcoming season, and Johns was apparently included in the deal to offset the loss of Daley in Dallas. Now, I understand that trading Sharp may have been necessary given his large cap hit and Chicago’s desire to re-sign Marcus Kruger before the start of the season, but that does not mean that the Hawks aren’t going to be hurt by the minimal returns they have received as part of that trade.

On paper, the initial trade of Sharp for Daley and Garbutt didn’t seem too terrible. Daley was coming off a 16-goal season in Dallas and was supposed to fill the hole in the Blackhawks’ top-four defensive grouping left by Johnny Oduya’s departure. Meanwhile, Garbutt was a fast and feisty winger who figured to team with Andrew Shaw to make the team harder to play against. But even though this trade was supposedly about the cap space that Chicago needed to clear, it was actually just as much about Bowman’s desire to improve his roster in creative ways. 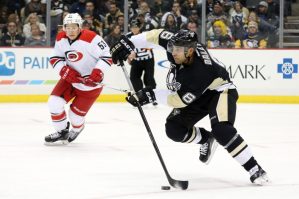 A quick visit to capfriendly.com shows that the Hawks gained only $2.5 million in cap space from the trade of Sharp and Johns to Dallas, despite being able to move Sharp’s $5.9 million cap hit. To put that in perspective, the Blackhawks could have gained almost just as much salary cap space simply by trading Andrew Shaw ($2 million cap hit) instead of Sharp and Johns. Of course, a deal like that would mean more maneuvering on Bowman’s part, but it was his initial insistence upon receiving roster players in return for Sharp that meant the cap benefits would be limited.

Daley turned out to be a complete disaster in his brief stay with the Blackhawks, while Garbutt’s physical style did not fit in on Joel Quenneville’s roster. As a result, both players were eventually dealt in separate trades, leaving Bowman with nothing from his initial haul in the Dallas trade.

It didn’t take too long for those trades to happen either. In yet another effort to clear cap space for his team, Bowman dealt Daley to Pittsburgh for Rob Scuderi, with the Penguins retaining 33% of Scuderi’s contract. 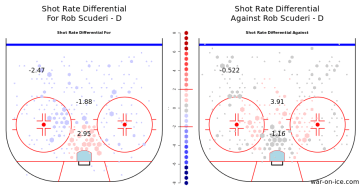 This cleared minimal space for the Hawks and brought back a player who played sparingly in his time with Chicago. The veteran defenseman eventually played 17 games for Quenneville, recording zero points and averaging just 11:05 of ice time before being traded to Los Angeles for Christian Ehrhoff. Ehrhoff has one assist in five games and has averaged under 15 minutes of ice time since his arrival. If you’ve been able to follow all of these sequential transactions up to this point, you would have realized that the Hawks thought they were adding a top-four defenseman in Trevor Daley at the start of the season, but ended up with an aging veteran on a one-year deal who has served as a rotating sixth defenseman on the backend. The tradeoff for this downgrade was a mere $900,000 in cap space ($150,000 of space was taken on in the trade of Scuderi to L.A.). 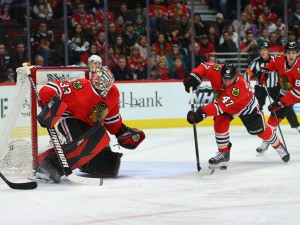 Meanwhile, Ryan Garbutt was eventually traded to Anaheim for Jiri Sekac, who played six games before being waived and claimed by the Arizona Coyotes. The combined production Garbutt and Sekac provided the Blackhawks was 49 games played, seven points, and less then 10:30 of ice time per game.

Compensating for the Losses

The one valuable asset that was gained in all of these moves was cap space. Bowman’s constant salary cap maneuvering was key in helping the Blackhawks acquire forwards Andrew Ladd, Dale Weise, and Tomas Fleischmann before the 2016 trade deadline. Those players were all valuable additions that will definitely help the team in the playoffs, but they hide a serious problem.

See, the acquisitions of any of these players may not have been necessary if Bowman had been able to acquire impact roster players in his initial trade of Sharp. For those laughing at their screens right now about the possibility of acquiring valuable players in a salary cap dump, take a second and think back to what Bowman thought he had initially acquired in Daley and Garbutt. Daley was supposed to be a top-four defenseman and Garbutt was supposed to play among the team’s top-nine forwards. The players were in place, but their performances left much to be desired. 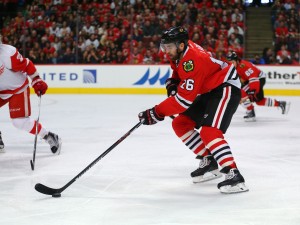 Instead of making that initial trade with Dallas, imagine if Bowman had been able to trade Sharp for a cheaper and less productive top-six forward (think about a Mathieu Perrault/Tobias Rieder kind of player) and perhaps a draft pick. That player fits in on the top line with Toews and Hossa for an entire season, making all three players more productive. A promising Johns stays with the team and is able to take a similar developmental path to the one he had with Dallas and makes the roster by the end of the season.

This leaves the team with cap space, a solid top-six, a slightly better group of defensemen, and a full set of draft picks and prospects to use at the trade deadline. Instead of being forced to fill a major hole in his top six with some of those assets (Marko Dano and the first round pick that went to Winnipeg), Bowman would have been adding to an already-strong roster the way he did in 2014-15 with a trade for Antoine Vermette. He still might have ended up trading some of the assets he gave away in his deadline moves, but some of those would probably still be available to use when shaping the roster this summer.

Hindsight is always 20/20, especially when looking at how trades play out in sports. But if nothing else, a look back at Chicago’s trade for Trevor Daley and Ryan Garbutt this summer should show how this poor trade ended up forcing the Hawks to make other moves throughout the year. It’s tough to question the job Bowman has done in Chicago, but it isn’t tough to see how this one trade has haunted the team this season, and could continue to do so if Johns reaches his full potential in Dallas.

Read Full Article on : The Fallout of the Patrick Sharp Trade in Chicago