‘Ducks Drill Down’ is a regular, ~weekly column that recaps the latest goings-on with the Anaheim Ducks.

The Anaheim Ducks sure do know how to bring the drama.

Less than a week after yet another comeback against the Edmonton Oilers, the Ducks had themselves a weekend that featured two come-from-behind victories against teams battling against them for playoff positioning in the Western Conference.

Friday night saw the Ducks defeat their southern California rivals, the Los Angeles Kings, in overtime after falling behind early in the game. Two nights later, Anaheim overcame a two-goal third-period deficit to defeat the Colorado Avalanche—also in overtime.

Of course, this would not be a true 2017-18 Anaheim Ducks storyline if the good vibes were not marred by more injury news. Against the Avs, goaltender John Gibson had to leave the game early, as did stalwart defenseman Cam Fowler.

Anaheim’s week did not get off to a great start, as a 4-1 loss Tuesday night against the bottom-feeding Vancouver Canucks north of the border put a sour taste in their mouths at the end of their Canadian excursion.

“It’s frustrating. This is the time of year we want to be playing our best,” Ducks defenseman Josh Manson said following the game. “Those are crucial points, so obviously not the outcome we’re looking for but we’re still not in a terrible spot.”

The Ducks did not play again until Friday’s tilt versus the Kings at Honda Center, and they did so with a necessary renewed vigor. The game lived up to the hype of being the biggest non-playoff installation of the freeway series. The low 2-1 final score belied the intensity and action that pervaded the affair, as it was essentially a playoff game given the implications.

Anaheim fell behind 1-0 early but battled back to dictate the play more than they generally had in recent weeks. After knotting things up in the second period thanks to a Nick Ritchie tally, the Ducks got to overtime, at which point leading scorer Rickard Rakell sniped home a beautiful wrist shot to give Anaheim the extra point.

The victory got the Ducks to within one point of the Kings in the standings, with a game in hand. They would make that game in hand count Sunday night against the Avs, but not without planting some seeds of doubt first.

Down 3-1 going into the third period despite controlling most of the action at even strength, Adam Henrique and Ryan Kesler each scored to tie it up. Then, Ondrej Kase continued his breakout season, scoring another gorgeous overtime winner to follow up Rakell’s beauty from two nights before.

While allowing the Kings and Avs to each secure a loser point is not optimal for the Ducks, the pair of victories nevertheless has put them back in third place in the Pacific Division, boosting their postseason chances significantly as they head into the season’s final week.

Gibson and Fowler Exit Versus Avalanche

In what has been a trying season in many respects for the Ducks, emotional wins of this fashion could be the boost they need to enter the playoffs with some confidence. Of course, having a fully healthy squad will also be key, and now that is looking tenuous once again.

For the umpteenth time this season, the Ducks saw their star goalie leave a game early following a collision. Somewhat late in the first period of Sunday’s game, Colorado’s Gabriel Landeskog ran into Gibson, with some help from a shove by Kesler. Gibson stayed in the game for the rest of the period, but Ryan Miller came out for the second period and Gibson did not return.

Late in the third period, Fowler—who already missed significant time earlier this season with a knee injury—took a hard hit into the boards and appeared to hurt his left arm/shoulder. He went to the locker room and did not play in the overtime period. 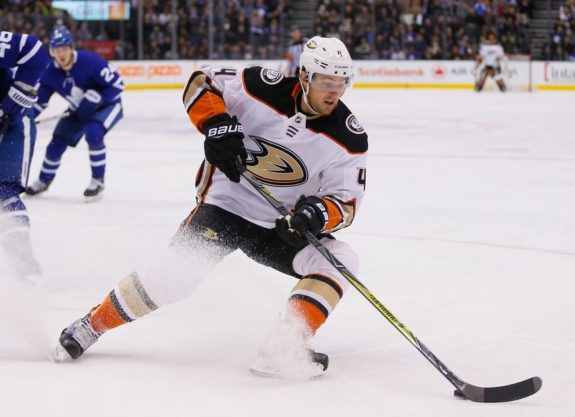 Fowler took a hard hit late in Sunday’s game against the Avalanche and did not return afterward. (John E. Sokolowski-USA TODAY Sports)

After the game, Anaheim head coach Randy Carlyle did not provide any meaningful updates on either Gibson or Fowler, only saying that both would undergo assessments and that more information would be available the next day. With the fate of the Ducks’ season hanging in the balance and the playoffs potentially around the corner, the organization and its fans will have to hold their collective breath before finding out the prognoses.

What We Learned & Ducks’ Upcoming Schedule

Between injuries, inconsistent overall play, and poor possession metrics, it hasn’t been the prettiest season for the Ducks. Yet, in their two biggest games of the year—both against teams they are trying to beat out for playoff positioning—the Ducks came through with two of their better efforts all season. Even though they fell behind by two against the Avalanche, they were owning the lion’s share of possession, so the third-period rally was not overly surprising.

In both games, Anaheim played with a level of intensity not seen nearly enough this season, and it translated to more control, more puck possession, and—albeit with difficulty—positive results. The takeaway is that the Ducks, for all their issues this season, can be a dangerous club and have the ability to raise their level of play against strong competition when the stakes are high.

“The pressure (our team) puts on itself as individuals falls on the team,” said Carlyle after the victory over the Avalanche. “This group is experienced—playoff experienced, pressure experienced. It’s not all doom and gloom. They know how to play in those situations, play to the template.” 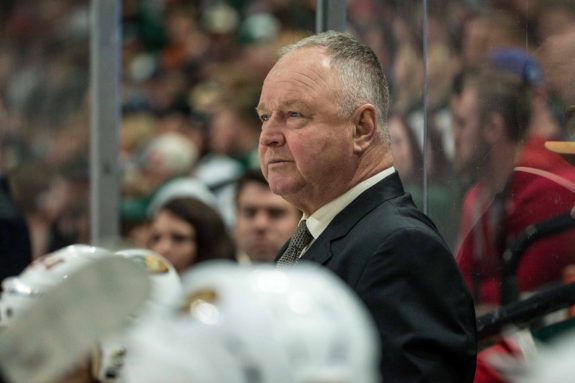 Randy Carlyle’s team came through in dramatic fashion in their two biggest games of the year to this point. (Brace Hemmelgarn-USA TODAY Sports)

The weekend also served as further validation that the franchise should be in good hands long-term with youngsters like Rakell and Kase providing high levels of skill and tenacity, as well as a penchant for coming through in big moments. The Ducks are also set in net with John Gibson, so long as these nagging injuries do not continue to derail him.

Heading into their final three games of the regular season—with or without Gibson and/or Fowler—the Ducks once again find themselves in third place in the Pacific, having leapfrogged the Kings, who now hold the first wild-card spot in the Western Conference. The Ducks have 95 points while the Kings have 94 through the same number of games (79). Anaheim also trails San Jose by three points, so it’s possible they could still catch the Sharks for second place in the Pacific, though not likely.

The Avalanche, also through 79 games, have 93 points and are holding the second and last wild-card spot. Nipping at their heels are the St. Louis Blues with 92 points and a game in hand. Meanwhile, the Dallas Stars have been eliminated, so that means only one of the Ducks, Sharks, Kings, Avalanche, Blues or Minnesota Wild will miss the playoffs. Given that and their current position, the Ducks have to like their chances.

Alas, there is still work to be done. The Ducks will finish up the regular season with a stretch of three games in four nights, starting with the Wild at home Wednesday night. The Stars will come to Honda Center for a game Friday night before the Ducks travel to Arizona to wrap up their roller-coaster of an 82-game campaign on Saturday.

The post Ducks Drill Down: The Comeback Kids Strike Again appeared first on The Hockey Writers.